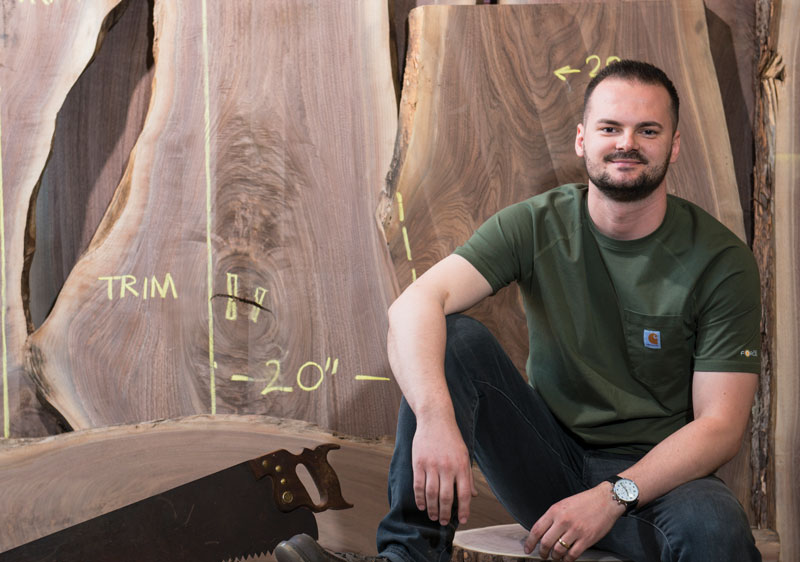 Like many successful businesses, Anton Maka Designs started small. So small, in fact, that Maka, who makes custom furniture, started his venture in his parents’ Shelby Township garage.

Maka, who has always been interested in design, studied graphic arts with the intention of one day becoming an art director with a newspaper or magazine. That part of his dream came true when, in 2013, he was working as a designer at an automotive enthusiast magazine in Detroit, and building furniture as a hobby.

“You know, it was never really in my head that I wanted to become a furniture maker,” he says. “I was more focused on traditional graphic design jobs. But once I started building, it just kind of took over. I fell in love with it.”

Maka says he worked at the magazine by day, and then would go home to his parents’ garage and work on his projects until after midnight. “It was addicting,” he says. “Once you see something that you’ve envisioned come to life, it becomes all you can think about.”

Even as his hobby started to take up more and more of his time, Maka didn’t really think about starting a business; he only started selling his furniture pieces when he absolutely had to. “I needed more room,” he says. “Once I finished a project, I had to get it out of the way to make more room, so I started selling them.”

He built a website (antonmakadesigns.com) and started showcasing his work and selling his pieces to customers nationwide. Eventually, Maka’s magazine career became a victim of his furniture-building success.

“Things were just going really well and I was enjoying it so much, so I decided to work on furniture full time. For like two years I was doing it on the side, and there’s only so much you can do when you’re working like that.”

He quit his graphic design job midway through 2013 and, in the same week, moved his operation out of his parents’ garage and into a proper workshop. “It was kind of terrifying to really put it all out there,” he says of the transition. “I remember thinking, ‘Is this crazy? Am I sure this is the right thing to do?’ ”

As it turned out, it was a great decision. Maka credits the growing economy of the mid-2010s as his ace in the hole. “I got really lucky as far as timing is concerned,” he says. “The economy was so good when I decided to do this full time, and I think that really gave me a leg up.”

In the five years that he’s been building furniture, he’s watched his business grow larger and larger. Two years after signing the lease on his first post-mom-and-dad’s-garage shop, he moved Anton Maka Designs into the larger, 5,000-square-foot Shelby Township space he’s currently using. And it doesn’t sound like the business will be there much longer.

“We’re just running out of room,” he says. “I remember when I first moved in, I wondered if I had gone too big; there just seemed like there was so much space. Now, a few weeks ago, we had to knock down a wall to use the back offices for a new router. Things are just getting super tight.”

The growth also allowed Maka to hire some employees. While he does the designing and much of the woodwork, Maka has a full-time welder on staff, as well as an expert in wood finishes. He’s also hired an assistant who helps him work on larger projects.

“You have to remember, when we’re making tables or benches, we might be working with big slabs of wood,” he says. “Those aren’t things you can just toss around. You really need someone to help you move that stuff.”

As the company grew, so has Maka’s ambition to go after larger clients. While his business started selling custom pieces to individual customers online, Maka say his end goal is to work exclusively with architects and interior designers. “That’s where the big projects are,” he says. “I love making custom pieces for individual sales, and I don’t think I’ll ever want to give that up completely, but for the health of the business, I think we’re smart to go after some of the bigger clients.”

Maka has built furniture for several different hotels and restaurants around the country, but he’s also designed and created significant pieces for local clients. Anton Maka Designs supplied more than 100 benches as well as several pieces for the downstairs lobby at the Detroit Foundation Hotel, which opened last year in a historic Detroit firehouse across from Cobo Center.

The company also designed and built all of the tables and benches inside Axel Brewing Co.’s Livernois Tap, which opened last summer in Ferndale, as well as those at the Tunnel Club at Ford Field in downtown Detroit.

“It’s very much a ‘who-you-know’ kind of business,” Maka says about new clients. “But at the same time, you always get a chance for your work to speak for itself. That’s why it’s great to get to work on bigger projects, because you get to meet a lot of architects and interior designers. And if those people like the work and mention it to their colleagues, you start to build a reputation.”

Along with residential pieces, Maka says his company’s growing reputation for quality comes from a desire to do everything in-house. “We do it all here,” he says. “We aren’t the only ones who do, but there are a lot of (furniture makers) who might do all the woodworking themselves, and then outsource the steelwork or the finishing process. If that works for them, great. But we like to do it all here. I think that allows us the most control over the final product.”

Maka says moving to a larger workshop is likely to happen in the near future, and he hasn’t ruled out hiring more employees. “We’re a small company at heart,” he says, “but we want to keep growing, too. And we’re going to do that at our own speed. That’s what has worked for us so far.”

Looking back, Maka doesn’t envision a return to the 9-to-5 graphic design world. “No, I don’t think that’s likely,” he says with a laugh. “Looking back, it was a really scary thing to do, to just up and quit a good job. But I can’t imagine doing anything other than what I’m doing right now, I really can’t. Looking back, quitting that job was the best thing I could have done.”