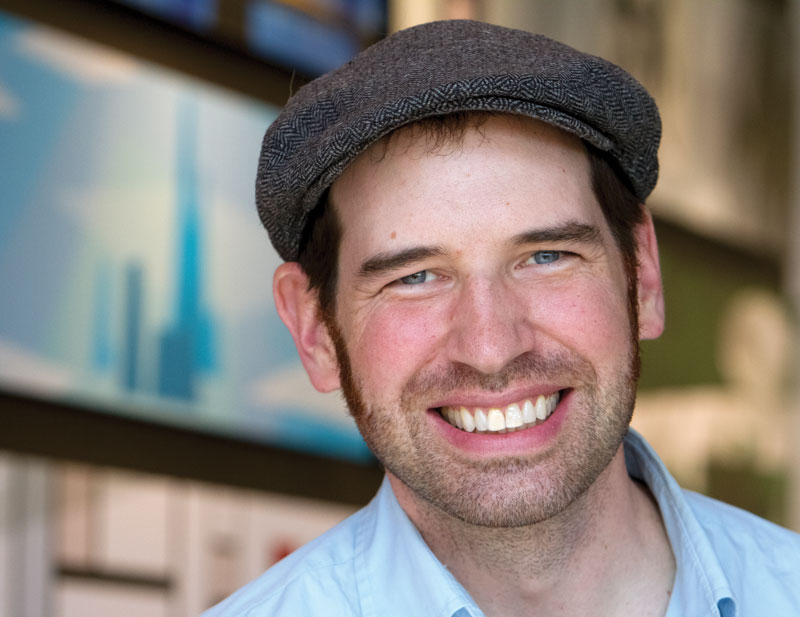 Jay Shuster was hired at Pixar Animation Studios in 2002, and started working as a concept designer on an array of what are now regarded as iconic films, among them the Cars and Incredibles franchises, WALL-E, and Inside Out. He says his fascination with a wide array of characters and mechanized vehicles began years before, as a kid growing up in the early 1970s on Madison Street in Birmingham’s Poppleton Park neighborhood.

“The neighborhood was a combination of white collar/blue collar,” Shuster recalls. “There was a guy across the street who worked on the line at Ford. Everyone around us had something to do with the automobile industry, advertising, or some related concern. It was a really inspirational kind of place to grow up.”

That was especially true in the Shuster home. “Both my parents had creative bends,” Shuster says. “My mom worked as a window dresser at Hudson’s in downtown Detroit, and my dad was a car designer at GM for 43 years. They both drew, they both created, and they both had really kind of fantastic imaginations.” 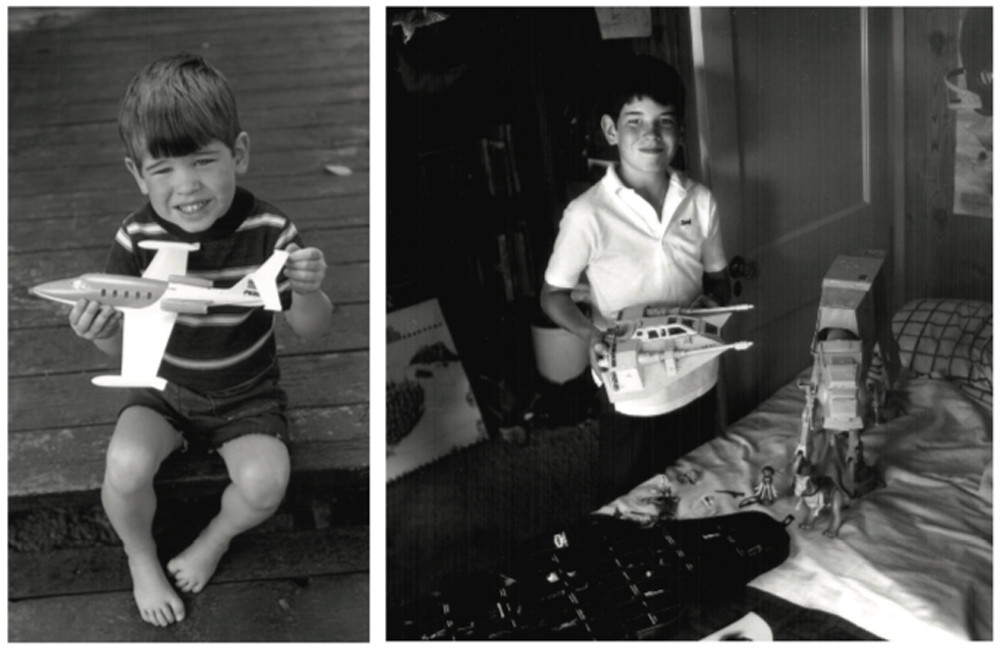 Not surprisingly, so did their offspring.

“It was a very quiet house,” Shuster recalls. “Each of us kids was doing our own thing. My brother was into music, my sister was into fashion design, and then I was doing my sci-fi stuff. I just remember it being an ideal childhood that way, from the point of our parents letting their kids be as creative as possible.

“It was never a battle to do what I wanted to do. And the house I grew up in had a trove of building stuff in the basement; train layouts … all different gauges. At one point our living room looked like an installation of what you’d find on the floor of the Henry Ford Museum — old rusted plows, farming implements of various scales and qualities, and crates of Legos all around.

“There was kind of an agrarian esthetic going on, and my dad was also a trash-picker,” Shuster continues with a laugh, “but he combined that with this kind of forward-looking design thing that he did at GM. He would cherry-pick the best of European and Japanese design, and he’d bring home these really cool design annuals. That inspired me to look back — but to look forward, as well.”

A milestone moment in Shuster’s life occurred in 1977, when he was just 6 years old and saw Star Wars: Episode IV – A New Hope.

“I stood in line with a ton of other people, wrapping around the block to see this movie,” he recalls, “and it basically changed my life. I went back to see it six times that summer. That’s when I decided I wanted to do movies. The next critical moment on that path was at a GM open house, and the guys in the model shop had built a full-scale R2-D2.

I immediately realized that what my dad was doing, designing and manufacturing stuff at GM in Detroit, was the same thing, basically, that (Star Wars director) George Lucas was doing on the West Coast. And at 6 years old, that was a huge realization. I decided I just had to continue on this path my dad was on … (by) drawing and honing that craft, and making myself as good at drawing as possible.”

The commitment to perfecting his work led to another significant event in Shuster’s life. As a fifth-grader at Pembroke Elementary School, he decided to participate in a poster contest. “I worked my butt off on that poster,” he says, “and was super proud and so protective of it, to the extent of putting it in a wrapper and under my bed until the day came to turn it in. I had these pens with super-fine points and illustrated the heck out of it, and I was like, ‘Oh, man, I got this thing in the bag.’”

Turns out, he didn’t. The poster was so good that the judges of the contest didn’t believe a fifth-grader could possibly have created it without getting significant help from his parents, so instead Shuster got an honorable mention for his efforts.

“I’ve traveled the world and I do a lot of speaking engagements, and Detroit really holds its own with its history and entrepreneurial spirit that’s never really gone away. I still see it as kind of a major player…”
— Jay Shuster

“That was a turning point,” he says ruefully. “There were a lot of instances like that, with adults coming over to our house and seeing some of my work spread out on the table and saying, ‘Oh, is your dad an artist?’ And I (was) like, ‘Yeah, but that’s my work.’”

Shuster continued to hone his skills in the Birmingham Public Schools, first at Derby Middle School and then at Seaholm High School, before heading downtown to the College for Creative Studies. “At the time, there was no entertainment curriculum at the design schools,” he says, “so I just had to find a curriculum that was a little more flexible. CCS did exactly that, letting me do my thing, pursuing this kind of sci-fi tangent in design.”

Several internships at companies with connections to the automobile industry tempted Shuster to stay in Detroit and follow a similar career path to the one his dad had forged, “but just by pure velocity, I avoided that,” he says. “Cars are amazing and I love car design, but from an early age I saw past that. I was like, ‘Yeah, cars are cool, but spaceships are cooler.’” 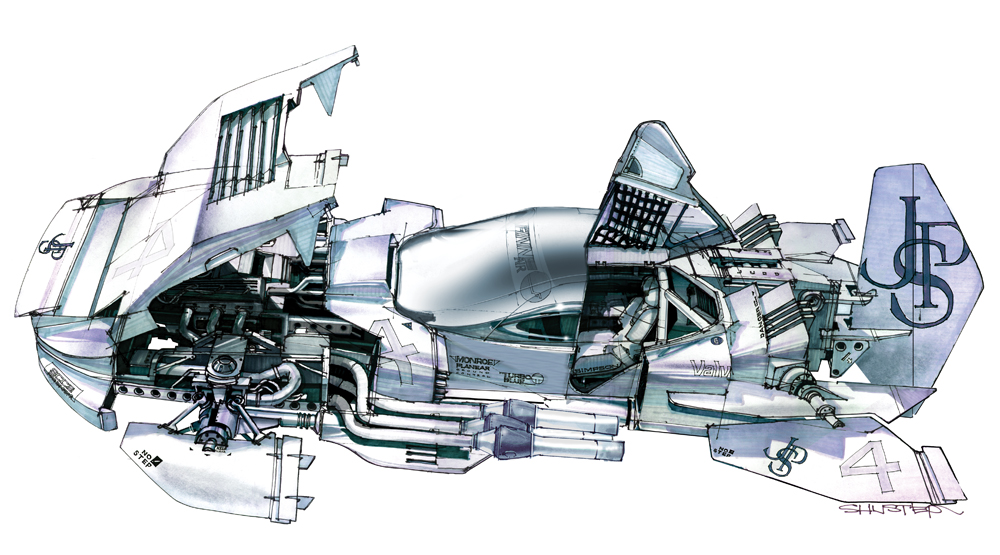 Soon after graduating from CCS, Shuster got his big break. “I did an illustration for the cover of a very popular computer graphics magazine, and that image was seen by a group of folks in Mountain View, Calif., at this video game place called Magic Edge. They were looking for a concept designer, and that was my step out West,” he says.

Before long, Shuster moved on to another startup in the Bay Area, a video game developer with strong connections to Industrial Light & Magic, the visual effects company founded by his idol, George Lucas. “I met a bunch of people who were connected to the art director on the next Star Wars film,” Shuster says, “and that was basically my entry into feature films — straight from video games to Lucasfilm. I landed that gig on tax day of 1996, and my bracket went up right away.”

At Lucasfilm, Shuster blissfully immersed himself in the Star Wars franchise that had first inspired him some 20 years earlier, helping to create vehicles, characters, and environments for its prequel film trilogy. “I feel like my years at Lucasfilm were the equivalent to college,” he says. “I (studied) the basic concepts of design at CCS, and then I received an on-the-job filmmaking education at Lucasfilm.”

When he landed at his next job, at Pixar, his creative focus switched: Instead of catering to the whims and demands of one individual, the creative process at Pixar is much more collaborative.

“At Pixar, I really found my stride amidst the diverse mix of colleagues and projects,” Shuster says. “Not to say the Lucas experience wasn’t creative; it was — but being part of a larger studio where many more people are involved, my individual opinion and aesthetic hold more power and meaning. My universe really began to expand at an exponential rate, and it showed in my personal happiness and the reams of paper I filled with ideas and concepts for the films here.”

And where, exactly, does the 48-year-old Shuster get the ideas that become the images, characters, and vehicles of Pixar’s award-winning films?

“From just about anywhere,” he says, laughing. “You gotta be a sponge, and to a fault. Sometimes people catch me staring at something off in the distance and ask what I’m doing, and I’ll just say something random and take that image I just saw and plug it into what I was working on that day.

“The taking in of information is constant, and that’s what we’re paid for — to have an immense vocabulary inside our head that’s on call at all hours of the day, so you can pull something out and combine an 18th century piece with something from the 1980s, and refigure it and put some function to it. I see it as product design, as kind of an extension of what they do in Detroit, but without the fiscal limits or federal safety standards. We can do whatever we want.”

Speaking of Detroit, Shuster’s connections to his hometown are strong, logistically and emotionally. “I’ve always worn my Tigers hat,” he says, proudly. “I remember, growing up, the family would go downtown to Hart Plaza or hang out at the RenCen. That was the catalyst that was supposed to bring people back downtown, but between there and Birmingham, there wasn’t much to engage in.”

And now? “It’s super exciting to see,” he says. “There’s so much to … cultivate and restore and build on. I never gave it much thought until I moved away and had a more worldly view of Detroit and how special it was.”

Among the many bonds that Shuster has with Detroit, perhaps most compelling of all is the fact that his father still lives in the home where Jay grew up.

“I go back to see my dad,” he says, “and also to get my 6-year-old daughter to know him and to experience the city, the beautiful buildings and architecture. I’ve traveled the world and I do a lot of speaking engagements, and Detroit really holds its own with its history and entrepreneurial spirit that’s never really gone away. I still see it as kind of a major player, even if it is kind of pulling itself up by its bootstraps at this point.”