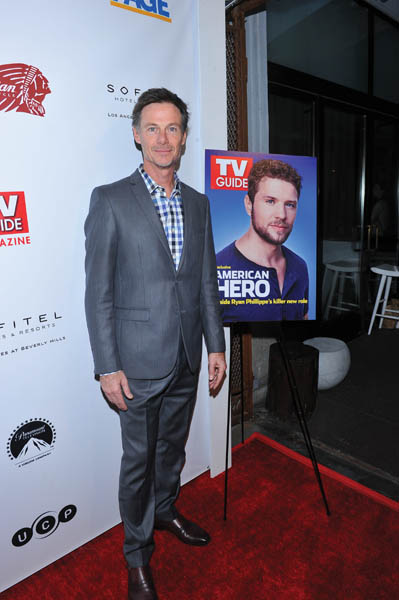 Paul Turcotte, president and publisher of TV Guide magazine, has lived and worked in New York City for the past 25 years. But he still proudly describes himself as “just a kid from Livonia,” where his family moved from downtown Detroit in the spring of 1967, only a few months before the riots that consumed large swaths of the city.

“It was a sort of traditional middle class and blue collar area,” Turcotte recalls, “typical white flight suburban neighborhood for the ’60s and ’70s. We all came together, whether it was kids playing football in the street or on the weekends when families would gather for picnics in the backyard, that kind of thing.”

That was on Brookfield Street, just off Seven Mile Road. Turcotte attended nearby St. Michael’s Elementary School, and graduated from Winston Churchill High School located along Newburgh Road in Livonia.

“I grew up around a lot of Midwest values,” Turcotte says. “People worked hard and supported each other. All of our parents did the same thing. We didn’t have doctors and lawyers; we had foremen, that kind of thing — (and) most were in the car industry. There was no class difference, and the people who got ahead all had the same work ethic: You were a man, so you got up every morning, you went to school, you did your homework, (and) you were responsible.”

A significant turning point for Turcotte came when he enrolled in the College of Communication Arts and Sciences at Michigan State University in East Lansing, where he soon became interested in advertising. “In the (advertising) program we had a competition every year that required us to do pitches,” he says. “That’s when I realized I was actually pretty good at it, and I think that’s what propelled me into really getting excited about the ad business.”

Turcotte graduated with a degree in advertising in 1982 and moved to Los Angeles, pursuing what began as a career in that field. By the early 1990s he was in New York, launching what would become an eclectic journey in media and entertainment, including magazines, online content, live events, and broadcasting.

“I’m a media executive,” he says, “so the connection with all of those is that while they were different companies, they all had the same basic premise in common, which is attract an audience and position it effectively to get strong ad dollars and generate revenue. My career has allowed me to have a ton of different experiences while doing that same thing. I learned that from the (advertising) program at MSU. Advertising is the profession, but you get to do it in every industry there is, and I think that’s fun because it’s allowed me to tap into a lot of different worlds.”

It also inspired Turcotte to develop a novel way to create a buzz around a brand when he was the publisher of Yahoo! Internet Life magazine in the mid-1990s.

“We were struggling to get consumer advertisers to recognize the magazine as a consumer brand, as opposed to a tech brand,” he says. “The internet was brand new, people were downloading music illegally, and the recording industry was up in arms. In my mind, all that conversation was good theater — so I created an event called the Online Music Awards.

“By the second year we had folks like Prince, Seal, and Public Enemy performing, and it was a massive success. It put our magazine on the map. We had great sponsors, and it taught me that when people can see and feel a brand in action and get the third party recognition that comes from names like we had, it allows everyone to feel good about your brand. Throughout my career I’ve used that strategy to help bring our brands to life.”

That experience also prompted Turcotte to explore his instincts as an innovator and entrepreneur. “I decided that I could do the same thing for other people,” he explains, “and that’s when we created AMPitLIVE.”

The program conceives and produces major events, primarily in the entertainment industry, providing not only content, but also exposure for any relevant brands.

“That’s how I came to TV Guide,” Turcotte says. “AMPitLive put on an event for TV Guide during Emmy weekend in 2015 — the Television Industry Advocacy Awards, where we recognized folks in the TV industry who use the power of their platform for social good. It was very successful, and it happened at the same time TV Guide was being acquired. They acquired me and AMPitLIVE along with it.”

What made that career move an especially happy one for Turcotte was that his new employer was NTVB Media Inc. — and they’re not only the leading publisher of TV entertainment and listings magazines, but their corporate office is in Troy. As a result, he has literally returned to the roots he established in his hometown.

Not only is TV Guide the top publication in the TV category; it’s also the 15th largest magazine in the U.S., and it’s a brand whose iconic logo is recognized around the world. In spite of those statistics, the guy in charge has the same attitude toward his job today as he did all those years ago growing up on Brookfield Street, when he was trying to figure out what he wanted to do with his life.

“I don’t know any better than to just give it my best shot every day,” Turcotte says. “I’m very, very proud to be from Detroit. I wear it with pride. It’s very much who I am and what I value, and what I try to push onto my three sons. I identify not only as a fan of Detroit, but of the Spartans, Lions, Tigers — the whole thing.”

When pressed to reveal whether any team in particular holds a special place in his heart, Turcotte has a ready, if not exactly predictable, response. “I don’t think the Lions get enough credit for being as bad a franchise as the Cubs and Red Sox,” he says, his voice beginning to rise just a tad. “The Browns get all the credit. But we should be right up there in the same conversation.”

Turcotte is just getting warmed up. “We were 9-7 this year,” he says. “We backed into the playoffs and we lost our first game! I tell people, I’m 57 years old and we’ve won one playoff game my entire life! One!”

Soon, he is in full-bore rant mode.

“They say, ‘No, that can’t be!’ ” he continues, “so when I hear the Browns fans complain, sorry, that doesn’t work for me. They’ve won more than one playoff game!”

It’s clearly safe to say the Lions are a bit of a sore spot for Turcotte, but he doesn’t let a lifetime of disappointment with the team in any way impact either the deep affection he has for his home city or his belief in its ongoing resurgence.

“I’m more encouraged now than I’ve ever been,” he says. “There’s more optimism now than I’ve felt in the last four to five years. This is the first time where I don’t feel it’s fleeting, you know? It seems like there’s a national interest in seeing Detroit thrive. I have a brother who still lives there, (and) so does my mom. And I say all this as I’m wearing my Shinola watch.”

Turcotte gets to Detroit on a regular basis, and is heartened by all the progress he sees downtown. “I like what’s happening on the riverfront,” he says, “and I’m encouraged to see how much youth there is. I do believe with that comes the arts and the entertainment, and I’m a big believer that our connection to the music world will be a big part of what brings Detroit back. I think there’s still a lot of pride in Detroit in that space.”

It’s not surprising that, on a recent trip, Turcotte and one of his sons headed to Cafe d’Mongo’s Speakeasy for some dinner and live music.

“I did it with pride,” he says. “I wanted to show my son where I’m from and what we do, and what our town’s like. I try to go downtown every chance I get and just put it in my veins. You can take the boy out of Detroit, but you can’t take Detroit out of the boy.”