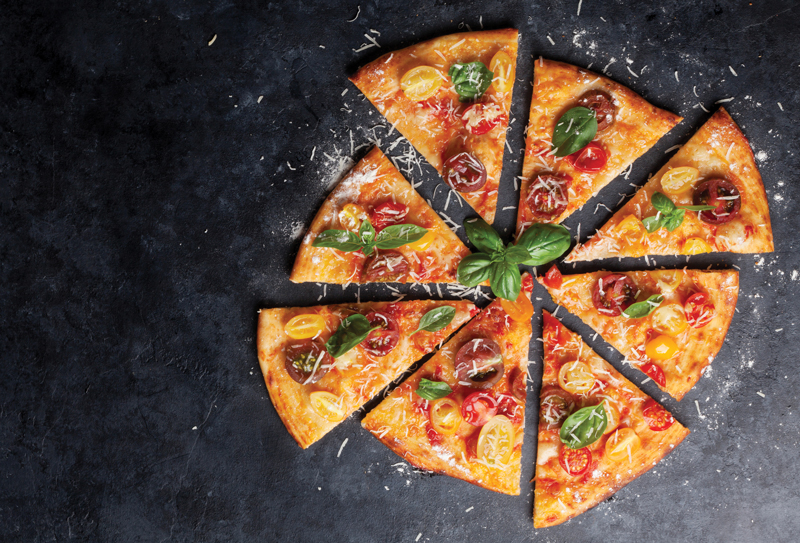 Whether it’s a craving for a whole pie or just a slice, anyone who’s ordered pizza in metro Detroit — or statewide, for that matter — can attest to a high concentration of selections, ranging from homegrown franchises to small-town favorites.

What’s more, nearly every small town across the state has a pizza business owned and operated by a local resident. Consider that Boynce City-based B.C. Pizza (99) made Pizza Today’s annual ranking of the Top 100 Pizza Companies.

Although many aficionados may expect quintessential pizza cities like Chicago and New York City to reign supreme, Smart Asset, a personal financial technology company, named Detroit the No. 1 destination for pizza lovers in 2017, based on customer reviews and the number of stores per capita. The Smart Asset ranking examined the number of pizza restaurants overall and per 1,000 people, average ratings on Yelp, the percentage of individual establishments that received high customer ratings, and a city’s cost of living.

“I think people assume New York and Chicago will come to the top, but we didn’t see Chicago even crack the top 10 (this year),” says A.J. Smith, vice president of financial education for Smart Asset. “Obviously for businesses to stay afloat, people must frequent their establishments, and one argument is that people in Detroit are getting pizza at a higher rate than anywhere else.”

Jerry McVety, owner of food service consulting firm McVety and Associates in Farmington Hills, says profitability and popularity among consumers were largely responsible for Michigan’s pizza franchise boom. “Being in the Midwest, pizza products work very well for the socioeconomic group that buys it,” he says.

Michigan boasts one of the nation’s highest concentrations of pizza chains, according to Pizza Today.  A large concentration of Italian immigrants sparked the industry, and now pizza is enjoyed by multiple nationalities.

“Pizza is a relatively inexpensive business to get into; you really only need an oven and some cooler space,” he continues. “Pizza also has a high margin of profit, and for those reasons, it makes sense that there would be more than even three or four (large) pizza companies throughout Michigan. Plus, we’re a major sports and entertainment draw, and you have people working different shifts at the factories, so people are always looking for a quick meal at a good price.”

McVety adds that different regions within Michigan tend to have favorites, with large franchises being most successful in urban areas and smaller mom-and-pop establishments proving more popular in smaller towns and more remote areas.

“Because Domino’s and Little Caesars are right now ranked second and third (Texas-based Pizza Hut is in the top spot), and Hungry Howie’s and Jet’s are doing a nice job of chasing them, when you look at it from a proliferation standpoint across the country, there’s a lot of pizza companies that are growing in most states, which is an indicator that pizza is a strong commodity when times are good and bad, because of the price point and value,” McVety says.

Founded in Detroit in 1946, McVety calls Buddy’s Pizza the Michigan patriarch, and says it has catalyzed the industry’s growth with its own success. “Even though Domino’s has far exceeded Buddy’s, which wanted to stay in Michigan, they were the catalyst of showing there’s plenty of opportunity for pizza in Michigan,” he says.

While McVety doesn’t think the market is at a saturation point, he doesn’t envision the Michigan pizza market changing much in the near future.

“The formula for pizza is cheese, pepperoni, and tomato sauce, and the differentiating factor has to do with price,” he says of Michigan’s competitive pizza market. “I don’t think anyone’s skimping on quality; the variance is all the things you can add on to it. It’s easy to be competitive in the pizza business and, in our case, have even a dozen strong competitors.”

Ron Hoffman, founder of hospitality marketing and public relations firm RJ Hoffman and Associates in Grosse Pointe, echoes McVety’s socioeconomic ramifications, noting that the low startup costs required to open a pizza business mean “just about anybody can get in the game.”

Tracing back Michigan’s pizza roots even further, Hoffman attributes metro Detroit’s affinity for the Italian pies to soldiers returning from Europe after World War II, where pizza was already prevalent. Similarly, as the automotive industry brought many immigrants and their families to Detroit and afforded them with vehicles, pizza franchises satisfied both the owners’ love of the food and a desire to have their own business.

He also attributes the high concentration of national and independent pizza shops in metro Detroit to a large audience. “It didn’t hurt that a good pizza brand could get a quick start in Michigan due to the 50-plus college campuses (here),” Hoffman says. “Coeds have a taste and a budget for pizza. Look at Domino’s, with their 30 minutes or less delivery time, and their entry into the college market by accepting checks from students.”

Whether it’s for the city’s namesake style (square deep dish slices with a crispy crust traditionally covered in pepperoni and mushrooms), the convenience of a $5 Hot and Ready, or a hometown favorite after a long day, Detroit can now add pizza powerhouse to its culinary resume.