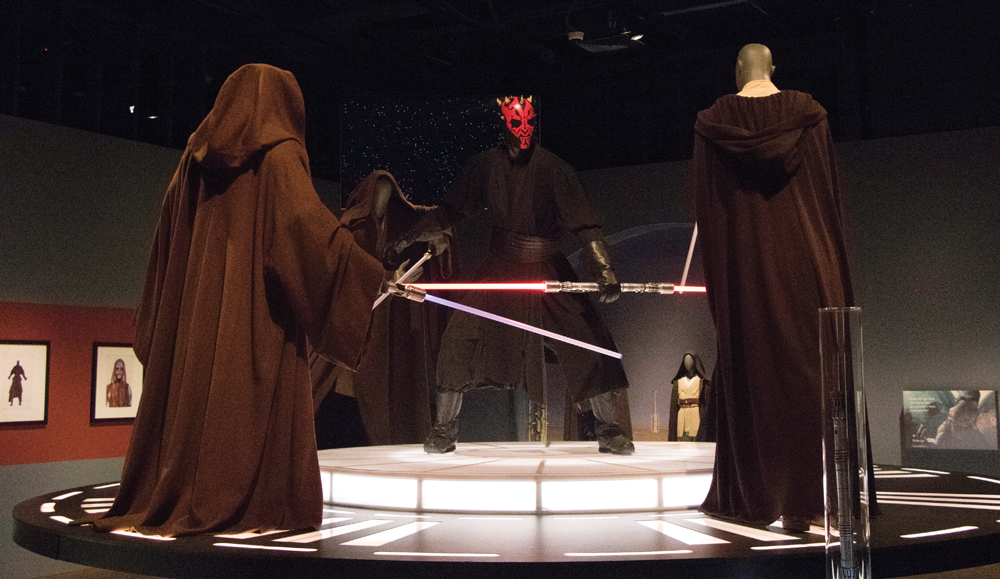 The force has awakened at the Detroit Institute of Arts with the exhibition “Star Wars and the Power of Costume.” Along with 60 costumes and close to 160 artifacts from the Star Wars films, which are featured in the museum’s biggest temporary gallery space, guests can enjoy an outer-space-themed pop-up cafe, peruse a temporary Star Wars gift shop, and check out multimedia tools  (available in English and Spanish).

“We chose to bring ‘Star Wars’ here because it (attracts) people who wouldn’t usually come to the museum,” says John Steele, vice president of exhibition, collection, and information strategies at the DIA.

The Star Wars show was organized by the Smithsonian Institution Traveling Exhibition Service (SITES), in partnership with the Lucas Museum of Narrative Art, and in consultation with Lucasfilm Ltd., which producer George Lucas sold to The Walt Disney Co. in 2012.  The exhibit has been touring the same way a rock band would, offering a playlist of eye candy; the DIA is its last stop on a schedule that includes  museums in the United States.

Museums can’t just choose to set up any available exhibition. They first have to demonstrate they can meet a specific set of requirements for the gallery space, which can dictate everything from lighting to security measures. It’s a rather monumental proposition; each piece is insured, and shipping, design, and placement of the objects are meticulously coordinated.

“(Lucasfilm) is very aware of its artistic legacy and wants to maintain exact control,” Steele says.

Strict requirements help preserve and protect the pieces in an exhibition, and ensure an exposition will have a good temporary home.

With popular culture shows like Star Wars, brand preservation and presentation also play a role. Star Wars is a still-evolving story, and all elements of storytelling must be consistent with the current narrative. Everything from a “Luke, I Am Your Father’s Day” event to Chewbacca cookie packaging at the pop-up cafe had to be pre-approved by both the Smithsonian and Lucasfilm, says Christine Kloostra, executive director of marketing and communications at the DIA. She adds that the exhibit’s curators made some parts of her job easier by providing marketing supplies.

“It’s a step in the process that we’re pretty accustomed to,” Kloostra says of the many approvals that are required. “This one was just a little more rigorous.”

Marketing isn’t the only thing that has to be pre-approved. Gallery spaces, for example, are redesigned for every show based on measurements and descriptions of the pieces. Every aspect of the environment is considered, with the goal of keeping visitors and the pieces safe — including temperature and humidity levels. In addition, barriers between people and the pieces, traffic flow, and Americans with Disabilities Act requirements must also be accounted for in the gallery design. The final gallery designs for Star Wars had to be approved by the Smithsonian and Lucasfilm.

When the exhibit was shipped to the DIA from its previous location, each artifact was settled into a crate that is customized to keep it safe. Steele and his team had to decide on the exact path each crate would take from the truck to the gallery space. The same level of care and planning will occur at the conclusion of the exhibition. 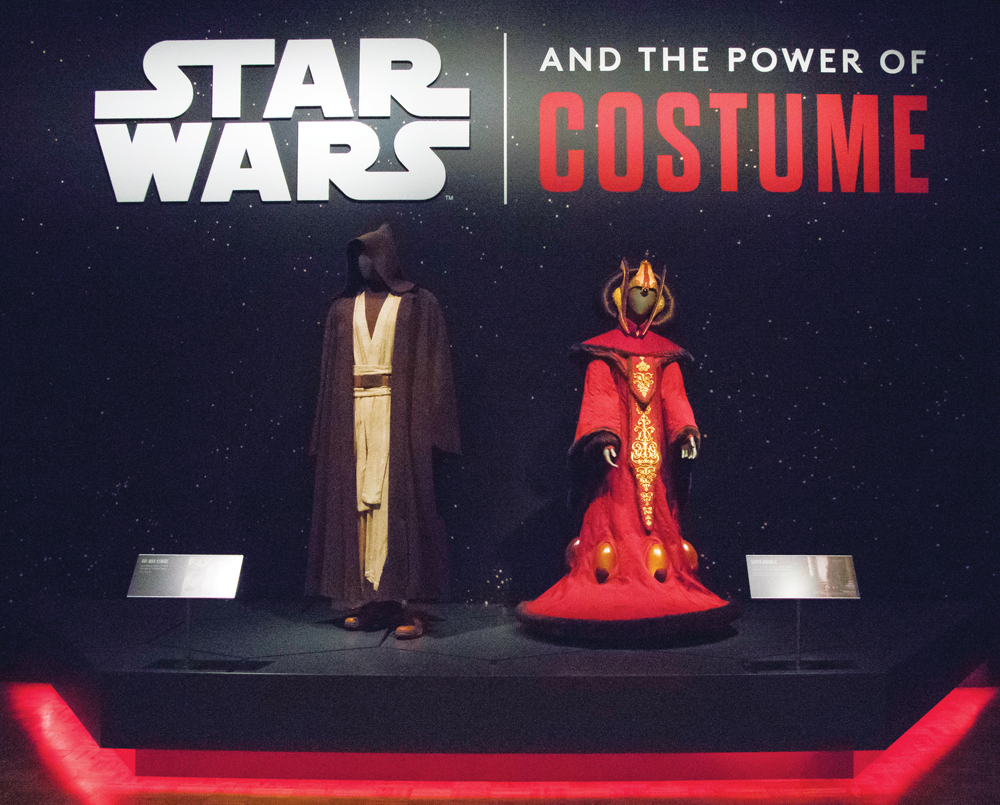 Two representatives from SITES travel with the pieces — a conservator who checks the condition of each piece before and after travel, and a registrar who handles the logistics and physical packing. A conservator and registrar from the DIA help to check over, pack, and unpack the artifacts, and representatives from both organizations must sign off on condition reports.

Given that the exhibition’s content makes it relevant to a wide audience, multimedia tools make the creative process more accessible. Visitors can press buttons to illuminate light sabers and hear Chewbacca roar. “Helping (visitors) feel comfortable and welcome, and wanting to return, is a focus of all of us at the moment,” Kloostra says.

She hopes the exhibition will help visitors realize the DIA is not a “special-occasion place.” Potential visitors to the museum often think they don’t belong in an art museum or that art is over their heads, she explains, but the museum staff wants community members to know that nothing could be further from the truth. In fact, they want visitors to have a good time. “If Chewbacca can make noise, (visitors) can make noise, too,” Kloostra says.

The DIA doesn’t want first-time guests to walk out when the last Jedi weapon leaves; to that end, parts of the exhibition encourage visitors to check out the museum’s permanent galleries by drawing connections between the pieces in the Star Wars exhibition and objects found in the rest of the museum. For example, a sign by Darth Vader’s helmet says it’s similar to a Samurai helmet. “I don’t think we would have made a fun, popular culture exhibit without those connections,” Kloostra says.

All exhibits have goals — benchmarks for revenue or the number of visitors — but not every exhibition is expected to wear the floor down, require extra security, or offer a pop-up cafe. Exhibitions that are more scholarly or aren’t expected to attract large crowds  are often free. The DIA typically hosts two major exhibits and six to eight smaller exhibits each year.

Current and upcoming exhibitions at the DIA, in addition to Star Wars, include “Play Ball! Baseball at the DIA,” which runs through Sunday, Sept. 16; while “Lost & Found,” which will exhibit vernacular photography, or photographs that were not originally meant to be art, will open Sunday, Aug. 26. Next year, from July 21 to Nov. 17, the DIA will present “Detroit Collects: African American Art in Private Collections.” More current and upcoming exhibition dates are available on the DIA’s website.

A museum-wide remodel in 2007 made the DIA more visitor-friendly, says Pam Marcil, the institute’s public relations director. Art “jargon” was removed from plaques, interactive displays were added, and the layout of the museum was changed. The remodel included the development of a strategic plan designed to make the DIA more relevant to a wider audience; the Star Wars exhibition is a step in that process.

“Star Wars and the Power of Costume” opened to the public on May 20, and will run through Sunday, Sept. 30. Adult tickets are $19 Tuesday-Thursday, and $24 Friday-Sunday. Residents of Oakland, Wayne, and Macomb counties receive a $5 discount on adult tickets.