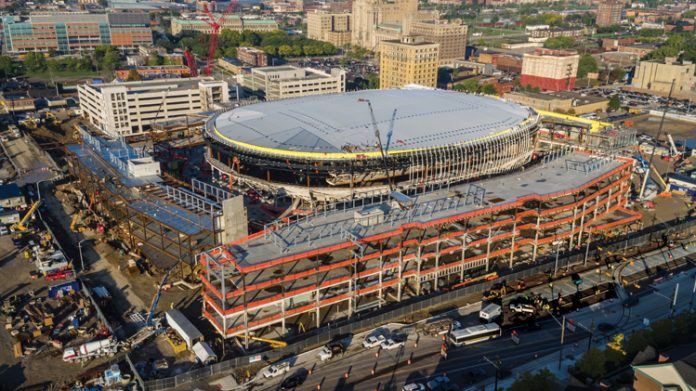 Q. Can you measure the vision or courage or faith it must have taken for Mike and Marian Ilitch to buy the Fox Theatre and move their Little Caesars offices downtown?

In the mid to late ’80s, I was only a few years past my own pizza career (delivering out of my banged-up 1975 Camaro for Papa Romano’s in Southfield) and had just started my first “real” company (Rock Financial), so I wasn’t nearly as familiar with the environment in downtown Detroit as I am today.

However, as I began to gain a deeper understanding of Detroit and what has happened here over the course of the last several decades, the vision that the Ilitches brought to downtown at that time was, and still is, inspiring. When you focus on any one point in history, it’s hard to put yourself in the position of the people during that time, since we have the benefit of knowing what occurred since. Still, I would suspect that the Ilitches’ decision to relocate their business downtown, as well as to renovate the Fox Theatre, came from a genuine belief that they could positively affect outcomes in Detroit. We all know they were successful in making big things happen and are continuing to do so.

Q. How much did the Ilitches’ commitment to Detroit influence you to move there?

In any significant sea change, it’s always hardest for the first mover to take the initiative. It becomes a little bit easier for the second guy to go, even easier for the third guy, and so on. That’s why momentum and consistent growth will always build the confidence of any marketplace.

Detroit, with so many massive challenges over the last 50 to 60 years, starkly highlights the importance of this concept. Who knows what would have happened had Mike Ilitch not moved Little Caesars to Detroit or made all of those subsequent investments over the years? Would Peter Karmanos and Compuware Corp. have come down in the early 2000s? Would we have come down if Mike and Peter had not made the leap before us? What about all of the companies that have followed since we first began our relocation and investment strategy in 2010?

Q. How much should Detroiters and Michiganders be thanking the Ilitches for their boldness and leadership?

You can make a pretty good case that if Mike Ilitch and his family didn’t start the “fire” almost 30 years ago, Detroit’s past, present, and future would look very different. Compuware might have stayed in Farmington Hills, and my personal peak probably would have been holding the record high for the most pizza deliveries (78) on that crystal-clear, light-trafficked, everyone-having-their-money-ready, lucky night of August 14, 1983. Needless to say, without the Ilitches, we might not be doing this interview right now! The butterfly effect is a real thing.

Q. How has Mike helped you?

When we were first contemplating coming to downtown Detroit in 2007 and 2008, Mike was a great resource. I found him to be a warm, optimistic, impressive, and inspiring man, (and he) was a powerful influence on our decision-making. I also find him to be grounded and down to earth. Basically, a “Detroit” kind of guy.

Q. How big of an asset to Detroit will the new hockey arena be?

Big. As you know, the Ilitches have wisely not developed this as a “hockey arena in a vacuum.” Although Red Wings games are an exciting centerpiece, the District Detroit development will draw on the energy of the arena to create a full-blown, multiuse development including housing, restaurants, and retail.

One of the biggest issues in downtown Detroit, which still remains largely unmentioned, is that we too often look at development as one site existing in a silo. In reality, everything is inextricably connected — the benefits of planning developments that activate and link the surrounding areas are immeasurable. …

When you drive down Woodward Avenue, there’s one simple but extraordinary detail that struck me that I’m not sure any of us would have designed 10 or 20 years ago: the Little Caesars Arena is literally built along Woodward itself. Connecting the energy of the arena and the street, along with the millions of visitors who will traverse in and around it each year, will be quite a different experience than climbing those stairs of The Joe on a cold Monday night in February, won’t it? Thank you, Mike and Marian!