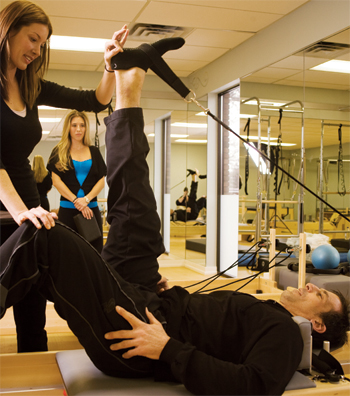 Soon after opening a bar intensity and Pilates studio in West Bloomfield Township last November, Kelle Ilitch started getting national inquiries for a 55-minute strengthening and lengthening workout that she and a team member developed. “We’re starting to begin licensing locations in Colorado, New York, and Maryland,” says Ilitch, owner of Pure Element Pilates. Offering a broad range of exercise sessions — from one-on-one training to 22-person classes — Ilitch (right, standing) has built up a steady and loyal following, including newcomer Chris Chelios, a star defenseman for the Detroit Red Wings. “I’ve done yoga for about three years, but one hour of doing Pilates is tougher than any practice,” says Chelios (bottom). “I really picked it up in California [during the offseason]. It’s an intense workout. It really helps me with my balance and strength.” A back injury a few years ago helped inspire Ilitch to open a well-equipped exercise studio. “I was traveling and and I kept asking myself, ‘Why doesn’t  Detroit have these New York- and Los Angeles-style studios?’” Working with Alicia Usiondek (left), a certified trainer and one of 12 top team members, Ilitch says Pilates has been rising in popularity. “The exercises strengthen both sides of the body, so one side doesn’t dominate.”