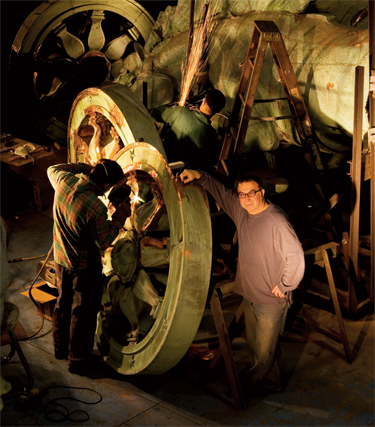 While the scene above may be mistaken for the back lot of Ben Hur II, Greece native Giorgio Gikas instead oversees the restoration of dozens of metal sculptures in the United States, including Victory and Progress, which sits atop the historic Wayne County Building in downtown Detroit. Gikas, who spent his childhood working for relatives in a bronze foundry in Athens, immigrated to America in 1984 and never left. “I won’t be a millionaire anytime soon, but I make a good living and my work is my passion,” says Gikas, president of Venus Bronze Works Inc. in Detroit. Working up to 80 hours a week during the busy season — preserving outdoor sculptures from March to October — Gikas says his biggest enemy is rust. “The chariots and other sculptures from Victory and Progress are hammered copper, just like the Statue of Liberty,” he says, “but the armatures supporting the structure were disintegrating, so we’re replacing them with stainless steel.” In addition to maintaining numerous sculptures at the Cranbrook Educational Community in Bloomfield Hills, Gikas is restoring Marshall Fredericks’ Spirit of Detroit in time for its 50th anniversary in September.