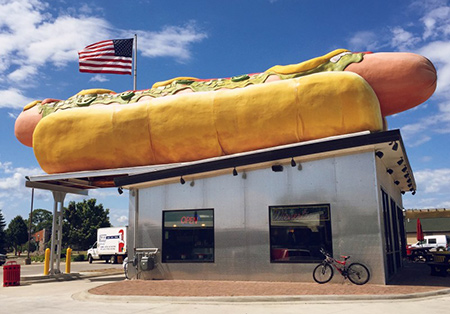 A 63-foot-hot dog sculpture — added to the top of a diner called Wienerlicious in Mackinaw City — is attracting attention from people passing through on I-75 at the base of the Mackinaw Bridge.

While the steel, spray foam insulation, and fiberglass sculpture is awaiting the word from the Guinness World Records folks about being the “World’s Largest,” Michigan locals and travelers are pulling off to see the oversized roadside oddity.

“Michigan boasts the ‘World’s Largest’ model tire, cherry pie, weathervane, picnic table, and working rifle, so where better to build a giant weenie?” says Henry Behling, a representative for Great Lakes Roofing and Insulation, the Sault Ste. Marie-based company that provide the spray polyurethane foam to create the sculpture. “The artist insisted on SPF foam, and we’re experts at spraying foam in this Michigan climate, so it worked out great.”

When the Wienerlicious owners, Frank N Stuff Inc., wanted a giant hot dog atop their new building, they didn’t have far to look for the guy to make it happen. They chose the same artist who created a 30-foot tall grizzly bear just up the street in Mackinaw City, Ron Berman of Berman Studios, Inc.

“I’m a urethane man,” says Berman, who spent years working for Disney in Florida, where everything is made with expanded polystyrene, known as EPS.

Wienerlicious owners say the giant hotd og is working exactly as they hoped at attracting customers. As one reviewer on TripAdvisor put it, “When you drive past a restaurant called Wienerlicious with a giant hot dog on the roof how can you not stop and try it?”