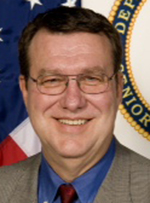 Hallock leaves his position as the executive director of the Army Contracting Command in Warren after six years at the helm.

“I am deeply honored to have been considered for this critical position in our Army. At the same time, it is with a heavy heart that I depart ACC – Warren and the TACOM Life Cycle Management Command.”

“Harry is an innovative leader who cares deeply about his people and has done much to advance the Army acquisition career field. As one of the founding leaders of ACC, he has helped shape and establish our command as the DoD’s preeminent provider of decisive edge contracting solutions and practices. Although I will miss Harry’s wise counsel and leadership, we look forward to working with him in his new position to provide America’s Army the tools they need to fight and win.”

Hallock began his career in Army contracting as a 22-year-old intern at the Detroit Arsenal and has been a Michigan resident for the past 33 years.

“This is my home and it will be difficult to say goodbye to the many colleagues, friends, and family I have met and gotten to know, appreciate and love over the years. I am honored to have served here in so many different capacities and although I worked hard to learn the craft of Army contracting, it was those around me, who mentored, supervised, supported, taught, and worked side-by-side with me and who allowed me to learn from them, that are responsible for my reaching this point in my career and I am eternally grateful,” Hallock said.

Hallock hopes to continue to make a difference in his new position and has wished his ACC-Warren family well in their future endeavors.

“I came to love this crazy contracting business right here in this organization, an organization that enjoys the reputation as one of the best contracting enterprises in the Army. I have been, and will always be, proud to have been a part of the TACOM Life Cycle Management Command and the Army Contracting Command.”