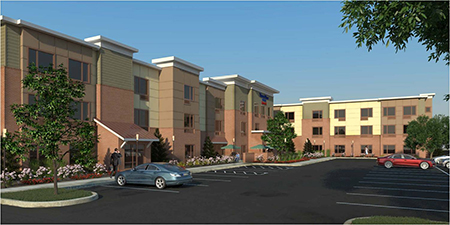 AUBURN HILLS — The city of Auburn Hills announced this week the proposal for a Marriott TownePlace Suites hotel to be built near Great Lakes Crossing Outlets. The estimated $4.6 million three-story, 80-room investment is slated for development on the piece of land south of the former Borders bookstore, west of Baldwin road and north of Great Lakes Crossing drive.

The Planning Commission reviewed and approved the new hotel project at its June 25 meeting and it now moves on to the Auburn Hills city council for a vote on July 1. If approved, the project will be the third hotel adjacent to Great Lakes Crossing Outlets owned by developer Basil Bacall. His other developments include the Hampton Inn and the Holiday Inn Express, both of which are located north of the proposed new hotel site along the mall’s ring road near I-75.

“We are pleased at the possibility of having another hotel in Auburn Hills that can serve the needs of both our business community and out of town guests who come to Auburn Hills for shopping and entertainment,” said Steve Cohen, director of community development.  “Basil Bacall’s decision to build another high-quality hotel project here shows his confidence in Auburn Hills’ economic climate and his continued commitment to excellence.”