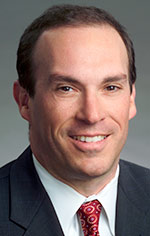 SOUTHFIELD — Brooks Kushman shareholder Frank Angileri has been named Michigan’s IP Litigator of the Year by Managing Intellectual Property magazine. The award is given each year during the publication’s North American Awards dinner.

Angileri, who also serves as co-chair of Brooks Kushman’s post-grant proceedings practice, was awarded for his work across various technologies and industries including, automotive, consumer electronics, industrial technologies, food and beverage, and home appliances.  He was also named in Managing IP’s “IP Stars” listing, a comprehensive guide to leading IP firms and lawyers covering more than 80 countries.