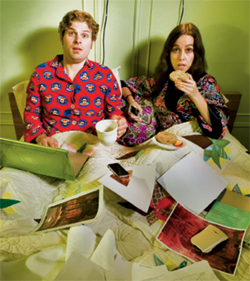 The late ad executive Ron Stone used to stroll the halls of his agency in Troy each day at 5:30 or 6 p.m., commenting to anyone packing up, “Half day?” He was only half kidding.

John Boyd, a partner at Signature Associates, a large real-estate services company in Southfield, understands the message Stone was sending. “We have an organization with a strong work ethic,” he says. “It’s important for our brokers to see our culture, what we do, and for my partner, Steve Gordon, and [me], to set the standards for the office.”

Boyd rises each morning at 2:30 a.m. and is at his desk by 3. Training for Signature’s incoming recruits is on Wednesdays at 5:15 a.m. Overwhelming? Perhaps. But not to Boyd, who typically works a 15- or 16-hour day before returning home to his family for dinner by 6 or 7 each night.

“It’s not work to me,” he says. “It’s what I do. By coming in early, it allows me to make lists, prepare necessary proposals, and be organized for the day. All of that keeps me from feeling stressed out and overwhelmed.”

Boyd perceives himself as a success story made of hard work and a take-charge mentality. But is there a line of demarcation that indicates whether or not he’s a workaholic? Boyd’s heavy schedule certainly works for him, but others may allow steady, 80-hour weeks to consume them, especially in a country rooted in the Puritan ethic of working hard, keeping your nose to the grindstone, never complaining, and continuing the rise up the corporate ladder. The challenging economy, both here and across the nation, is also causing people to work longer hours to maintain a productive career, especially among salespeople whose income is tied to commissions.

“Work addiction is the only addiction society rewards,” says Robert Fulton, an expert in multidisorder treatments and CEO of The Meadows in Wickenburg, Ariz., an inpatient treatment facility specializing in drug addiction, anxiety and mood disorders, and compulsive behaviors such as eating, gambling, sex, and work addiction. “The byproduct of work is additional money, which is what some people will work for,” Fulton says. “For others, it’s a defense mechanism, a way of medicating or avoiding one’s feelings.”

Other busy executives may not know they have a problem. “I think successful people get focused on what they’re doing,” says Robert Sher, a certified business coach in Livonia. “Often they love what they’re doing, and they fall into the trap. They don’t see that they’re a workaholic. It makes them feel good, important, wanted, and needed. Until people are ready, you cannot get people to recognize it.”

Fulton says there are three key aspects that make work addiction like any other addiction: preoccupation, tolerance, and continuance. Workaholics, he says, are preoccupied by their work, which allows them to avoid their feelings. Eventually, they develop a tolerance to longer and longer days, so that a normal eight-hour day becomes too minimal for them, and they increase their work days to 10, 12, or 15 hours a day. “It’s never enough,” he says.

They also continue their work habits despite negative consequences, because their self-esteem is dependent on the work. “The pleasure center in the brain is activated by the work,” Fulton says, “and the byproduct of the work [is] having enough money to buy all of the toys [that allow] someone to feel omnipotent.”

Fulton says that the roots of work addiction may stem from an individual’s childhood, where a child’s self-esteem is determined by how well he or she achieves or performs. Gregory J. DeMars, a partner specializing in real estate and other commercial activities at Detroit-based Honigman Miller Schwartz and Cohn, recognizes that his childhood is what drives him to work 80-hour weeks.

“I grew up poor, with my mother raising four kids alone working as a secretary,” says the 53-year-old attorney. “That’s a great motivator. I work seven days a week. I get to the office between 5:30 and 6:15 in the morning, and I leave between 6 and 8 at night. I have a lot of evening meetings, city council meetings, and I take phone calls all evening. ‘24/7’ is my motto. It’s not everyone’s cup of tea, but it’s a lifestyle of choice.”

His wife, special-education teacher Phyllis DeMars, hasn’t always loved living with a self-proclaimed workaholic. “It was difficult,” she says. “I did a lot on my own. Anything to do with the house, every chore, all of the repairs, raising the kids, getting the kids to sports, I did. On the other hand, I got my way on everything. I knew when I married him that he was an overachiever, but what you know and how you feel can be different.”

Now, with children grown and global communications devices readily available, Phyllis would like her husband to take time out to travel with her. “It’s time to enjoy the fruits of his labor,” she says. “Otherwise, what was the point of it all?”

Overall, workaholics are found to have less satisfying relationships because their main focus is on their work, and it’s where they get their enjoyment, says Doree Ann Espiritu, a psychiatrist with Henry Ford Medical Center in Novi.

“Sometimes they’re oblivious that this is what has made their life the way it is, so they need to change their perspective,” she says. “If there are dysfunctional behavioral patterns that need to be addressed, such as they do not feel they need to sleep much, for example, or where the work defines them … [we] can help them reframe how they approach work and their relationships.”

Diane, a real-estate agent in Birmingham, discovered that therapy for a work addiction allowed her to regain her life without losing her career.

“I am a workaholic,” she says, “but not as bad as I used to be. There was a time in my life when I couldn’t be away from my cell phone without being really stressed out, and I sacrificed my social life and my health for work. I would work until I was exhausted, wake up, sleep, wake up, work, sleep. … I stopped going to the gym, stopped seeing friends, until they stopped calling. I didn’t feel like I was good enough unless I worked the extra hours. There clearly was a perfectionism aspect.”

Janet Karson, a senior sales representative with Obagi Medical in West Bloomfield Township, can sympathize. “I have two components I know about myself: I’m a pleaser. I want to please my boss, my clients, and my family. I’m also a perfectionist,” she says, “setting standards, both personally and professionally, and I always want to meet those standards. Since I joined Obagi three years ago, I’ve increased my territory and its profits by 300 percent. I feel pressure to continually produce at the same level and grow at the same amount, and I want to maintain the same growth. But sometimes growth can level off because of external factors.”

The economy in Michigan began to fight against her best efforts and took a toll on her personally. “I was having insomnia and anxiety,” Karson recalls. “I couldn’t sleep because I couldn’t disconnect at night. I would be thinking about my workday. I would lie in bed planning my next day’s agenda. I stopped exercising because I was too fatigued.”

A friend’s heart attack made her take stock of her work/life balance and realize that she wasn’t managing her stress and her life well. “Now I have a different mindset,” Karson says. “I’ve gained perspective, and I’m setting boundaries. I bought a BlackBerry to respond to e-mails in real time to clients, which frees up my evenings on the computer. I’m setting aside administrative time during the week, so I don’t have to work on the weekends. Every day I know I’ve done the best I can and maximized my opportunities. That’s when I give myself permission to let go, and I’ve started sleeping.”

DeMars, on the other hand, has trouble sleeping, but he figures it’s the price he pays for internalizing the problems of his clients. “I attract a lot of clients like me who work hard,” he says. “I might fret and toss and turn and not sleep well, but I get up each morning and I’m ready to go. I shouldn’t let it get to me so much, but that’s how I deal with stress.”

PDAs, such as BlackBerries and iPhones, are designed to manage time more efficiently, but they’re often part of the problem. These devices provide easy access to the Internet and e-mail, and also function as a cell phone, work planner, address book, and more.

Users are often connected 24/7, perpetually multitasking. Most people have little trouble setting a PDA aside during personal hours. “But for the addict,” Fulton says, “it defeats the purpose of making their life easier because they have to get that hit. They cannot be separated from it. It’s the [ultimate] intensity gadget that precludes intimacy.”

Burnout, fear, illness, or the loss of a job or an important relationship can suddenly cause a workaholic to reassess his life, take a step back, and perhaps get therapy to regain control. “Sometimes they wake up and realize they haven’t smelled the roses, seen the Little League games, gone to cultural events,” Sher says. “Their families have moved on without them, they have a heart attack, or see a friend have one, and they say, ‘What’s all this been about?’” As an executive coach, Sher works with individuals to help them figure out how to improve their productivity, quality of their work, and relationships. “So many people have their work tied into their identity,” he says.

Intertwining work into one’s persona and perception is particularly true of workaholics, who spend so much of their life defined only by their work. Often they reach a point of exhaustion, either physical or emotional, and get to the point of thinking, “what now?”

“When someone is healthier, they’ll achieve more in an eight-hour day than they [would] in a 12-hour day,” Fulton says. “Preoccupation and tolerance drains away productivity.”

Diane agrees, finding that her income has risen and that her life is far more rewarding now that she has more balance to it. “If we set our priorities outside of our work, then we may not feel such a compulsion and may experience more joy,” she says. “The mission is to find the joy.”