Detroit’s recent construction boom is breathing new life into old buildings as well as creating new ones. In 1981, however, years before the city’s revival had a heartbeat, Jon Gandelot acquired the historic Trowbridge House along East Jefferson Avenue in Detroit, the oldest building in Michigan, and contemplated his next move.

One of Gandelot’s clients was interested in turning the structure into a restaurant, but after seeing it, he decided it wouldn’t fit his needs. Gandelot thought the former residence would make a good law office, and went in on a deal with Stanley B. Dickson Jr., an attorney and certified public accountant, and Tim Stoepker, a third partner. Gandelot was the majority owner of the property. “It was his brainchild,” Dickson says of Gandelot. “It was his idea to buy the house.”

The Greek Revival Federal home was built for $2,500 in 1826 for Charles Christopher Trowbridge and his wife. It still has its original hand-hewn support beams and stone foundation, but by the time Gandelot and Dickson bought it, the building was in disrepair. Dickson says it was a “vagabond hangout.”

In spite of its outward appearance, the three-story house was structurally sound. The original windows, which were made in Boston, are thicker on the bottom because the glass settled. The house’s door fixtures came from New York, and some of its fireplaces are original. 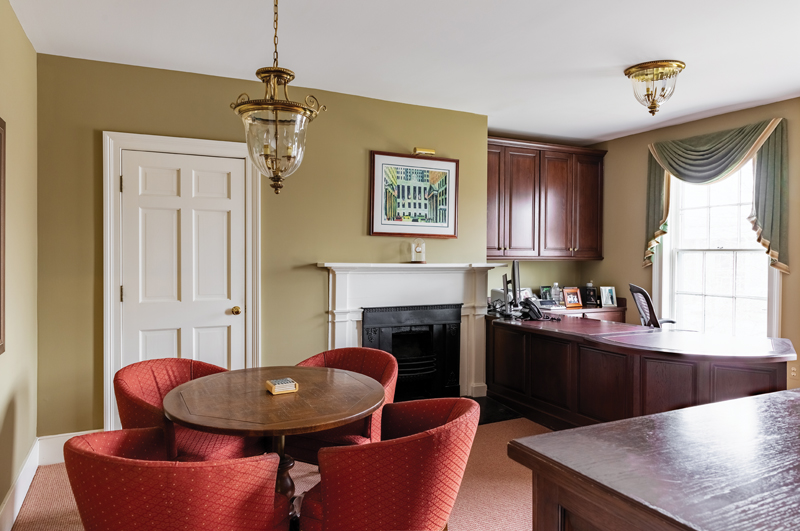 The house underwent a year-long renovation before opening in 1981. New electrical and plumbing were installed, the chimneys were re-tuckpointed, and the house received new flooring and a new roof. None of the walls
were moved.

In a tribute to Trowbridge and his family, photographs and a book of expenses detailing the construction of the house are kept in cases in the first office on the right, just beyond the front door. Farther down the hall, on the left, a portrait of Trowbridge watches over visitors.

While big changes were made, the owners tried to keep the building true to its original form. Historians from the Detroit Historical Society advised on color choices, and the house’s outside features have been maintained. It still feels like a home.

“The ambiance here is much different than that (found in) a glass office building,” says Dickson, adding that it’s easy to feel comfortable enough to ditch your shoes and kick back. Natural light also keeps things feeling homey. Dickson says the atmosphere adds to the camaraderie among those who work in the Trowbridge House.

Still, owning an old structure comes with its challenges. Just last year, Dickson discovered an underground water pipe was emptying out where it shouldn’t have been. He has since had it moved. “There are always surprises when you deal with old structures,” he says. 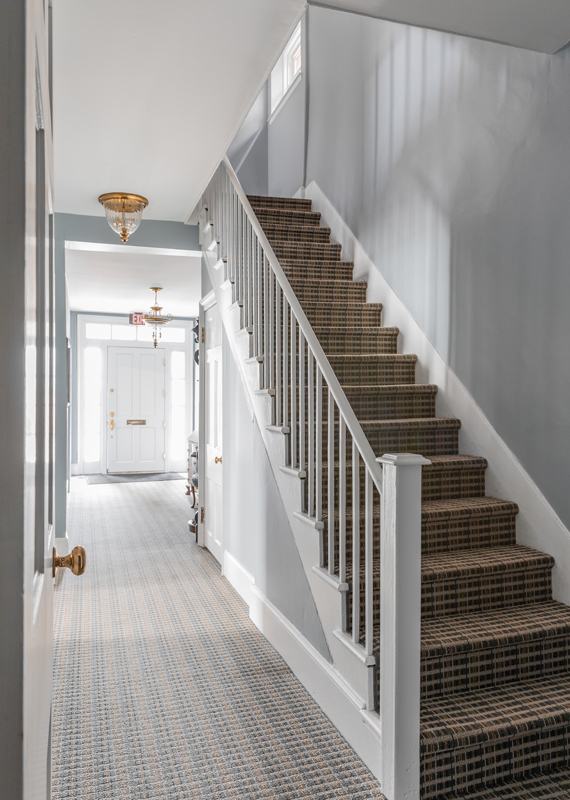 There are also mysteries. Rumor has it that the original manor was twice as large, but one of the two heirs who inherited the house destroyed her half of it in a fit of anger. There are no images of the house that show its original size.

A lot is known about Trowbridge himself. The Detroit Historical Society reports he was a businessman, explorer, politician, and ethnographer of Native American culture. He had the house built outside of the city walls because he had good rapport with local tribes, Dickson says.

Trowbridge was born in Albany, N.Y., in 1800 and moved to Detroit in 1819, where he worked under Maj. Thomas Rowland as deputy U.S. marshal and deputy clerk of the court. In 1820, he served on the Lewis Cass expedition, exploring the Northwest Territory between the Great Lakes and the Mississippi River. He was appointed Cass’s personal secretary after the expedition and served as an Indian agent for the U.S. government from 1821-1825. In this position, he was responsible for treaties and relations with Native Americans.

Around the same time, he was appointed secretary of the board of regents at the fledgling University of Michigan, and served on the board for many years. In 1825, Trowbridge became cashier of the newly established Bank of Michigan, eventually was named its president, and stayed with the bank until 1838.

Trowbridge moved into the house in 1827 with his wife, Catherine Whipple Sibley, the oldest daughter of Solomon Sibley, the first appointed mayor of Detroit. Soon after, Trowbridge’s business interests expanded, and he became president of the Oakland and Ottawa Railroad Co. He also worked in real estate and served as president of the Detroit Board of Public Charities. 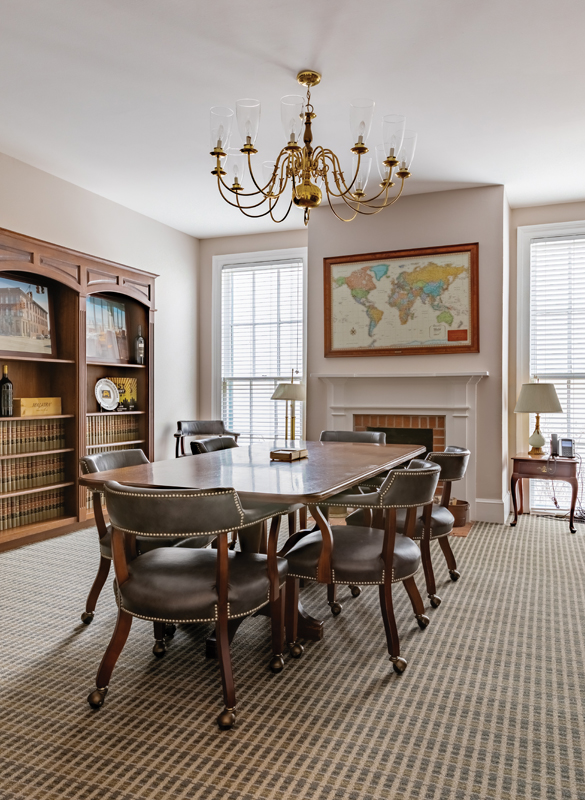 After serving a year as alderman of Detroit in 1833, Trowbridge was elected mayor, but stepped down after serving through a cholera epidemic in 1834. He ran unsuccessfully for governor of the state in 1837. Trowbridge lived in the house until he died in 1883, and he and his wife are buried in Detroit’s Elmwood Cemetery.

The house remained in the Trowbridge family and was converted into a rooming house during the Great Depression. The family sold the house in 1942 to Marie Cavanaugh, who converted it back into a single-family residence. It was designated a Michigan State Historic Site in 1974 and was listed on the National Register of Historic Places in 1976.

The two houses were so close together that, over time, the bay window on the Bosquett Building eventually touched the Trowbridge House. It was at that spot that Dickson had the houses connected.

The land around the houses has seen a lot of changes over the decades. The Trowbridge House was once riverfront property, but the path of the Detroit River has since shifted and, over time, some of it was filled in. The door that was once closest to the river was considered the front door, but visitors now enter through the door that faces Jefferson Avenue.

Dickson says he’s looking forward to having more neighbors. A new hotel, a mini Meijer store, and apartments are slated to be constructed nearby. “We’re kind of in the center of all this new growth here,” he says.