Recent large-volume electric delivery vehicle orders by Amazon and UPS have made the headlines, but Roush CleanTech in Livonia is making a strong case for providing propane-powered vehicles to commercial fleets and school districts looking to lessen their environmental impact and save money.

To that end, Todd Mouw, president of Roush CleanTech — a division of Roush Enterprises, which is owned by NASCAR team owner and Ford Performance partner Jack Roush — is bullish on propane as a viable alternate clean fuel option.

“Everyone talks about EV as the only answer,” says Mouw, who has been part of CleanTech since its inception in 2010. “If you’re a fleet and you want to make a positive impact in your community from an emissions standpoint, and also reduce costs and be able to put money back into a school or back into a business to innovate, propane really works well in both areas. Propane is kind of the perfect union of environmental and economic sustainability.”

“Propane is a low-pressure liquid,” he says. “We’ll give you comparable range to gas and diesel. A school bus might have 400 miles of range, depending on the tank option a district chooses. A commercial truck range could be 200 miles to 400 miles. We’re not asking that fleet to compromise. Propane can do everything it’s supposed to do. We can pack a lot of fuel on board.”

As part of its offerings, Roush CleanTech retrofits Ford 6.8-liter V10 engines with its propane autogas fuel delivery system. The new package features a liquid injection system that solves many of the performance and cold-weather issues of early propane-powered vehicles.

Although Roush CleanTech is celebrating its 10th anniversary this year, its origins began in 2006 when a trade group called the Propane Education Research Council contracted Roush Industries to convert a Ford F150 pickup to propane power just to see if it could be done.

When that program was successful, the Roush team did some research to determine if there was enough potential demand for propane-powered vehicles to merit starting a business.

“With the drive toward cleaner emissions and the move toward domestic energy sources, we saw there was a play for us,” Mouw recalls. “As technical guys, we liked the way propane integrated into the vehicle. We liked the range. We liked the infrastructure. There were a lot of pros to it. Everything at the time was about natural gas, but we liked propane from a transportation perspective.”

CleanTech was established to convert light-duty Ford pickups to propane power. In year one, CleanTech and its five employees delivered about 200 propane-powered F150s and F250s, and brought in close to $2 million in revenue. 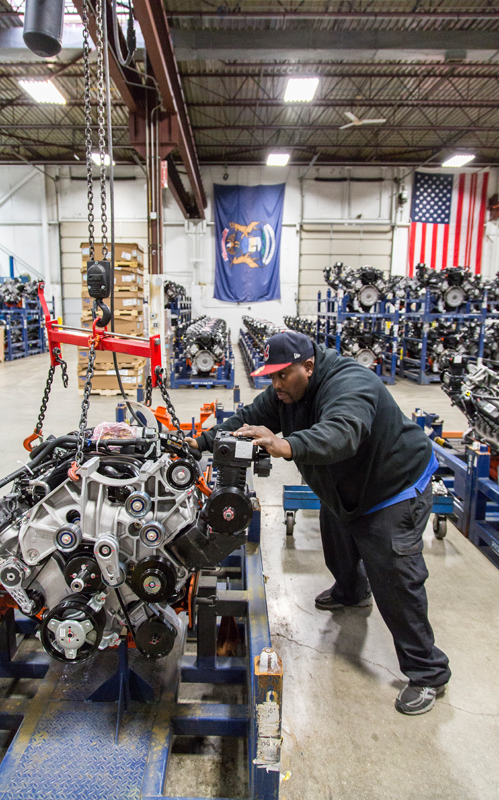 In 2011, the Roush crew figured out that fleets using medium-duty trucks were a better fit for the benefits propane has to offer. Today, virtually all of Ford’s commercial vehicle lineup can be converted to run on propane.

The work began to pay off in 2012, when CleanTech started a partnership with Georgia school bus manufacturer Blue Bird. “That’s when we started to see that uptick in sales happen,” Mouw says.

CleanTech now has propane-powered school buses in 1,000 school districts in the U.S. and Canada. In fact, Mississippi is the only state in the union in which there is no CleanTech propane-powered vehicle running. “We’re going to conquer that in 2020,” Mouw states.

“We haven’t even scratched the surface of the overall school bus market. There are 14,000 districts and a lot more buses. The Holy Grail for us is there are 400,000 old dirty diesel buses out there.”

In 2019, the company, which has 130 employees, delivered around 4,500 commercial trucks and school buses, and posted approximately $100 million in sales.

There are 20,000 CleanTech propane-powered vehicles on the road today, and 15,000 of those are school buses operating in 48 states.

That begets the question: Does propane have a future as a fuel for passenger cars? “Most of the 20-million-plus vehicles running on propane around the world are passenger cars,” Mouw says, “but drivers here are so used to having gas available on every corner, it’s a tougher sell. We believe that if fleets and school districts lead the charge, the infrastructure will follow.”

He thinks widespread adoption of propane as a passenger vehicle fuel is a long-term proposition. “Consumers may see the school buses and delivery trucks and ask, ‘Why can’t I get this for my Ford Fusion or my Ford Expedition?’ For so long, Detroit got bashed for not thinking ahead. Now, there’s innovation that’s happening here, harnessing what we’re good at for the improvement of other people’s lives.”