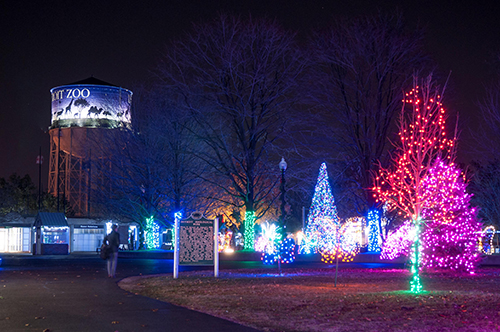 “We’re grateful to our community for another great year and look forward to providing more outstanding guest experiences in 2014,” says Ron Kagan, executive director and CEO of the Detroit Zoological Society.

Kagan says the opening of the Jane and Frank Warchol Beaver Habitat in 2013, along with improvements to several exhibits including the bear den pathway and Japanese macaque and great apes habitats, helped attract more visitors.

“Regarding the guest experience, our emphasis is on friendliness and cleanliness, and our visitors really notice and appreciate that,” Kagan says.

The attendance to Wild Lights, the Detroit Zoo’s holiday light display, has drawn more than 30,000 guests thus far, contributing to the year’s numbers, Kagan says. The exhibit continues through Sunday.

The zoo is also offering several other family-friendly wintertime events this month and in February and March, including Wild Winter weekends offering children’s music, zookeeper talks, games, and crafts. The activities take place from 11 a.m. to 3 p.m. and are free with zoo admission. For more information, call 248-541-5717 or visit detroitzoo.org.

Besides record attendance last year, the zoo announced plans to start construction this spring on a $21 million penguin exhibit. The 24,000-square-foot facility, believed to be the largest center in the U.S. dedicated to penguins, was made possible, in part, by a private $10 million donation given by Stephen Polk and his family. Polk is vice chair of the zoo’s board and a longtime executive with automotive information provider R.L. Polk & Co. It’s expected to open in late 2015.