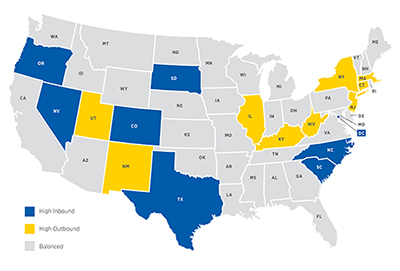 After 16 years with a migration deficit, Michigan recorded a balance between people who moved into the state and those who moved out in 2013, according to an annual study by United Van Lines.

“Despite having an unemployment rate higher than the national average, home sales and home prices are up showing an increased demand for housing, the state’s per capita income is up, and automakers in Detroit have rebounded and are hiring,” says Michael Stoll, economist and professor at the University of California in Los Angeles.

Based on household moves handled by St. Louis-based United, the study classifies states as “high inbound” if 55 percent or more of the moves are going into a state, “high outbound” if 55 percent or more moves were coming out of a state, or “balanced” if the difference of inbound and outbound is negligible. The study found Oregon was the top moving destination last year.

Before 2013, Michigan had a migration deficit since 1997 and was the top outbound spot from 2006 to 2009. That distinction is now claimed by New Jersey, with 64 percent leaving the state.

“We’re … seeing continued migration to the Pacific Northwest as young professionals and retirees are drawn to amenities including public transit, green space, and the local arts and entertainment scene,” Stoll says. He adds that business incentives, industrial growth, and lower costs of living are attracting people to the southeastern and western states such as South Dakota, Colorado, and Texas.

The top outbound states for 2013 were: