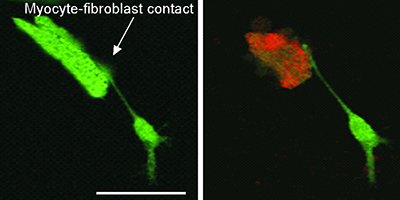 A new technology developed by University of Michigan researchers could be used to destroy cells within the heart that cause cardiac arrhythmia, a condition in which the heart beats erratically, often leading to a heart attack and stroke.

“The great thing about this treatment is that it’s precise down to the level of individual cells,” says Dr. Jerome Kalifa, a cardiologist and assistant professor of internal medicine at U-M. “Drugs spread all over the body and high-power lasers char the tissue in the heart. This treatment is much easier and much safer.”

Dr. Kalifa says when the disease is treated with drugs serious side effects often develop. Meanwhile, another procedure called cardiac ablation burns away the malfunctioning cells using a high-powered laser, but the laser also damages surrounding cells, which can cause artery damage.

Cardiac arrhythmia affects more than four million Americans and causes more than 750,000 hospitalizations and 130,000 deaths per year in the United States.

He says the next step is to begin human trials using the technology. The researchers are also working to devise a method for producing larger quantities of the nanoparticles at pharmaceutical-grade standards. Dr. Kalifa says widely available treatment based on the technology is about five years out.

The paper, titled Cell-selective Arrhythmia Ablation for Photomodulation of Heart Rhythm, was recently published in Science Translational Medicine. The university is pursuing patent protection for the intellectual property.