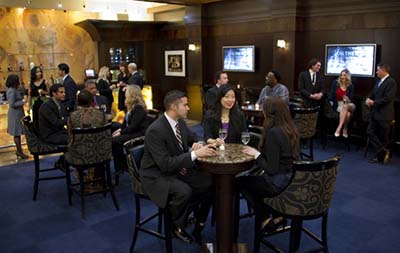 Palace Sports and Entertainment today announced an expanded partnership with PNC that gives the Pittsburgh-based financial institution naming rights to the Courtside Club, the Courtside Studio, and the weekly Courtside Show that airs on Detroit Sports 105.1-FM. Terms of the agreement were not announced.

“We are pleased to continue our long-standing partnership with PNC Bank and elevate their involvement in new and exciting ways,” says Dennis Mannion, president and CEO of Palace Sports and Entertainment in Auburn Hills.

The PNC Courtside Club opened in November 2005 and has room for 180 guests, is available exclusively to front row, courtside ticket holders.

The PNC Courtside Studio, located inside the Courtside Club, is home to the weekly Courtside Show and is the primary location for Pistons press conferences and interviews. The club was created in 2012 as part of the second phase of a four-year, $40 million capital improvement plan. The Courtside Show airs on Saturday mornings on 105.1 FM, and is also live streamed on Pistons.com and Comcast’s CN 900 channel.

“We are expecting great things from the Pistons in the coming years and feel this is the perfect time to ramp up our partnership,” says Ric DeVore, regional president of PNC in Troy.

Last week, The Detroit Pistons and Palace Sports and Entertainment announced a partnership with FCA US LLC, giving the automaker exclusive naming rights to the West Atrium at The Palace and the Ivy Lounge at DTE Energy Music Theatre.