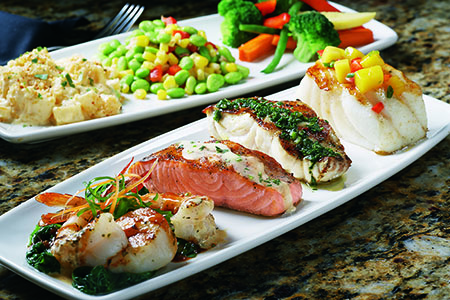 A number of restaurants are making their way to Troy in the coming weeks. Bonefish Grill and Carrabba’s Italian Grill are setting up shop at Big Beaver and I-75, and Northern Lakes Seafood Restaurant is relocating to the former Charley’s Crab location next to the Met Troy Hotel at I-75 and Crooks.

“A few years ago, many restaurant chains wouldn’t even look at Michigan to open (a new eatery),” says Ara Topouzian, president and CEO of the Troy Chamber of Commerce. “The fact that Troy is seeing so many restaurants opening … is a great indicator of our local economy bouncing back.”

Glenn Lapin, Troy’s economic development specialist, attributes the entry of several new eateries to an improving economy as well as changes made to zoning ordinances and the creation of the Big Beaver corridor guidelines a few years ago.

“(These guidelines) call for development right on Big Beaver or close to it,” Lapin says. “When you bring the buildings up on the street, it really creates a more pedestrian-friendly environment. It’s also meant to take up what used to be underutilized parking lots by putting developments and activity on them.”

Carrabba’s Italian Grill  and Bonefish Grill are both set to open Jan. 13. The latter will be the first in the state to offer a six-day lunch menu in addition to dinner and Sunday brunch operations, says Jared Kirkman, managing partner of Bonefish Grill in Troy.

“We chose Troy because it is a bustling business hub that ties together all of the northeast suburbs of metropolitan Detroit,” Kirkman says. “It is not only a business center, but with the Somerset Collection and other surrounding retail, it is the premier shopping and dining draw in all of Michigan.”

The Epicurean Group’s Northern Lakes restaurant is moving to Troy after being located in Bloomfield Hills for nearly two decades, and plans to host its official grand opening next week.

The decision to move the restaurant results from a combination of economic opportunities and brand reinvention. “We have been around for a long, long time,” says Eric J. Djordjevic, president of the Epicurean Group, which owns Northern Lakes and Epic Café, a new chef-inspired eatery also scheduled to open in the Met Troy Hotel.

“We wanted to give it a new home in one of the most beautiful dining rooms (designed by Albert Kahn and inspired by Packard President James Macaulay’s mansion in Grosse Pointe), and reintroduce the brand of Northern Lakes Seafood in a new, fresh, and exciting way.”

Djordjevic says he is “confident that our move, coupled with our commitment to provide an extraordinary dining experience, will add to the revitalization of the Crooks Corridor.”

Other restaurants that have opened in Troy within the past year include Piada Italian Street Food (Big Beaver and McClure), Tom Sushi (Rochester near East Long Lake), and Toucan (Dequindre and 19 Mile). Topouzian says the city’s 7,000 to 8,000 business will provide a stable foundation for the dining sector.

“Time will tell overall, but I certainly think there are enough business professionals and residents to support the restaurant structure that is building in our city,” Topouzian says. “I think these restaurants are positioned nicely and hope to see them flourish.”