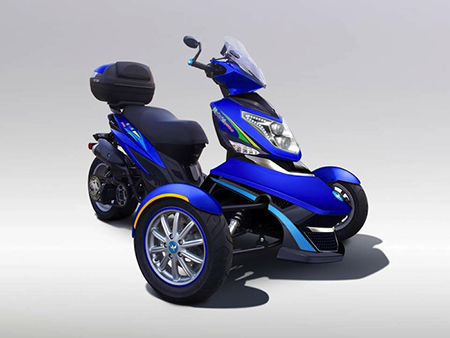 The three-wheeler (two in front and one in back), the Berylline’s F2A hybrid scooter runs at around 18 mph on the battery and can reach a max speed of 50 mph on gas. It has an 18-mile range when running on the removable battery.

“In the floor, where you have the battery set up, we have attached a lithium ion battery that weights six pounds,” Dresser says. “It can be pulled out and recharged into your home, on your typical 120-volt socket.”

The scooter is equipped with a 1.6-gallon gas tank and can carry up to two people.

“The one thing we noticed was that people were concerned about the leaning to operate (in two-wheel scooters),” says Dennis Dresser, owner of Berylline Co. “So our (scooter) is all automatic. You just turn it on and go and drive it more or less like a car.”

Dresser expects to sell 5,000 to 10,000 units a year. Prices start at just under $6,000. Oakland University students helped Berylline conduct a marketing survey that found the scooter could be a good alternative to golf carts in resort areas.