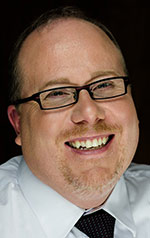 DETROIT — John Anderson has been named vice president of administration and COO of The Michigan Science Center in Detroit. Anderson brings more than 20 years of community engagement experience to this new role, where he will lead the center on initiatives to foster the growth of science, technology, engineering and math (STEM) education throughout metro Detroit and the state.

Anderson, of Southfield, will be responsible for strategically managing Science Center operations, business practices, financial reports and the organization’s culture. He also will build on existing momentum and the center’s successes to effectively guide the institution and aid in creating powerful, hands-on visitor experiences and programs.

Previously, Anderson was director of operations for the Detroit Zoological Society where he was responsible for leading and overseeing facilities, programs, and experiences. He also served as the manager of park operations for the city of Detroit’s zoological parks department, where he was the first professional Aquarist and initiated STEM programs into classrooms by placing endangered African cichlid fish directly in the care of students.

Anderson graduated from Michigan State University with a bachelor’s in zoology.