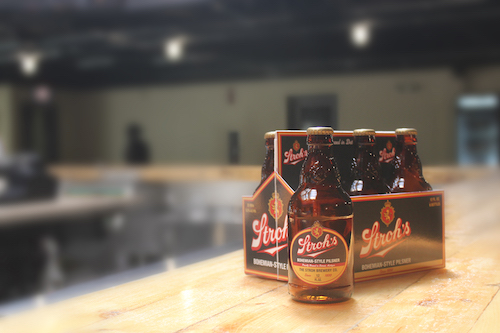 Stroh Brewery Co., one of Michigan’s oldest brands, will return to brewing beer in Detroit with the launch of its Stroh’s Bohemian-style Pilsner on Aug. 22.

“Stroh’s is Detroit,” says Dan McHugh, chief marketing officer of Pabst Brewing Co., which owns Stroh’s. “By reintroducing Stroh’s Bohemian-style Pilsner and brewing in the city, we are tapping into the history and heritage of Stroh’s and the innovation and hard work of the people of Detroit.”

The new Stroh’s Bohemian-style Pilsner — which will be brewed in Corktown’s Brew Detroit, a 68,000-square-foot brewing facility located at 1401 Abbott St. — is inspired by a Stroh’s recipe from the late 1800s.

“The beer is a crisp, balanced pilsner with a floral aroma, subtle hop spice, and a rich, bready maltiness made from Saaz and Magnum hops and Vienna malt,” says Brewmaster Greg Deuhs.

Stroh’s Bohemian-style Pilsner will be available in specially designed 12 oz. bottles at various retailers and on draft in Michigan restaurants, bars, and retail stores.

To celebrate the launch of the beer and the return of Stroh’s to the city, tapping events will be held on Aug. 26 at locations throughout Michigan.

In 1848, during the German Revolution, Bernhard Stroh, having apprenticed as a brew master, immigrated to the United States. He established his own brewery in Detroit in 1850 and named his company Lion’s Head Brewery, adopting the Lion’s Crest logo from Kyrburg Castle in Germany, which adorns Stroh’s beers today. Stroh’s was last brewed in Detroit in 1985, and Pabst Brewing Co. bought the Stroh’s brand in 1999.