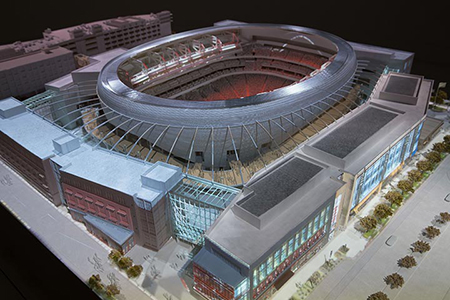 Detroit-based Olympia Entertainment and Olympia Development have opened a center in Comerica Park with three-dimensional animated models of the future District Detroit area and the new Red Wings’ arena, along with showcasing numerous features and amenities.

The 10,000-square-foot Preview Center, at the northeast corner of Comerica Park, features a 109-square-foot video projection model of District Detroit with audio; a 42-square-foot video projection model of the arena with audio; a full inventory system with suite options and season ticket opportunities; a 600-square-foot replica of a suite; Detroit Red Wings players Henrik Zetterberg, Pavel Datsyuk, and Niklas Kronwall’s lockers; Red Wings memorabilia including a laser-engraved Winged Wheel logo with the names of every member of the 11 Red Wings Stanley Cup champion teams; and a historic Zamboni used up through the 1965 season.

“Through the use of incredible models, video, sound, graphics, and technology, the Preview Center creates an immersive experience…” says Tom Wilson, president of Olympia Entertainment.

The center is initially open to businesses and investors who are interested in opportunities with the arena and District Detroit. Wilson says since opening the preview center, 26 of the 52 suites at the new arena have been sold.

“The new Detroit arena is going to offer one-of-a-kind fan experiences and reflect the excitement and energy associated with all that is going on in our hometown,” Wilson says. “The Preview Center is equally amazing, redefining how experiences like this are shared prior to the opening of the arena.”

Open house events and season ticket holder appointments will begin early next year. The District Detroit will also open an information center later this year for the public to learn more about the project.

District Detroit will be a 50-block walkable area that consists of six theatres, three multi-use sports venues, and residential units, along with office and retail developments. The Detroit Events Center, which will be home to the Detroit Red Wings, will open in 2017. Foundation work has begun on the new Red Wings arena.

Wilson says the project is expected to generate nearly $2 billion in economic activity and create about 8,300 construction jobs and 1,100 permanent jobs.

To view a video walkthrough of the Preview Center, visit DistrictDetroit.com.