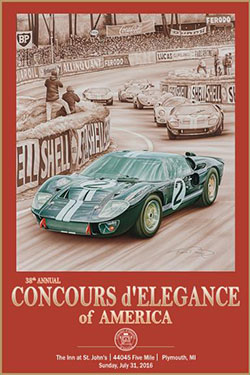 Featured vehicle classes at the 2016 Concours d’Elegance of America car show to be held this summer in Plymouth Township will include pre-war and post-war vehicles, performance cars including rally and drag cars, along with Dietrich and Pierce-Arrow classic cars, among others.

Moss says more than 300 vintage and classic automobiles and motorcycles from 31 states and countries are expected to be at the car show from July 29-31, to be held at The Inn at St. John’s at Five Mile and Sheldon.

“We’ve expanded our program over three days in order to attract a wider audience of automotive enthusiasts and first-time visitors,” Moss says.

He says more than 15,000 people are expected to attend, which includes the classic car show on July 31. A ticketed dinner, an auction, and other events round out the weekend of festivities. Barry Meguiar, best known as the host of the Velocity Channel series Car Crazy, will be honored as the 2016 Concours d’Elegance of America “Enthusiast of the Year.”