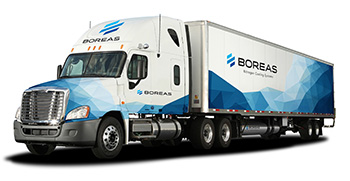 “Customers are continually looking for ways to maximize cost efficiencies, and the dual zone cooling system’s ability to control trailer temperature is an optimal solution,” says Hazen Sills, director of business development at Boreas. “…(It) provides customers with more flexibility, another option to save on cost, and an answer the market’s demand for a better solution.”

Sills says the system runs virtually silent, useful for transportation companies making deliveries in cities where residential areas are nearby. He says the system is also environmentally friendly, because it operates only when cooling cargo and it doesn’t generate carbon emissions.

He says Boreas’ nitrogen-based refrigerator system costs less to operate and runs much quieter than traditional trailers, which require a separate diesel engine to power the cooling system.

The company will unveil the product at the National Private Truck Council Exhibition in Cincinnati that begins Sunday. Last year, Boreas launched its direct-inject nitrogen cooling system at the show.