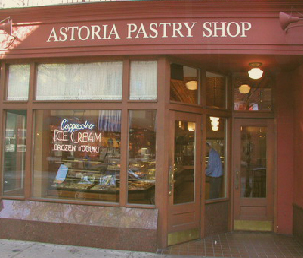 Krema — a pastry shop specializing in a Greek cream-filled pastry called bougatsa — plans to open in Detroit’s Greektown, at 531 Monroe St., in August.

“There’s no one that I know of around here that sells it,” says Tasso Teftsis, who owns the business with his brother Michael and sister-in-law Rosalva. “I have a friend who has the same kind of store in Toronto (Athens Pastry Shop), and he’s come to help us with that.”

Teftsis says the shop will also offer organic village spinach pies made with handmade filo dough; 16 flavors of homemade gelato (he recommends the pistachio); cronuts, which are a combination croissant/doughnut; and loukoumades, a Greek sweet soaked in honey.

Asked if he’s concerned the new shop will pose a threat to his Astoria Pastry Shop, 541 Monroe St., Teftsis laughs.

“Not really, we do make some of the same things, but other people have two restaurants on this street and they’re doing well, so two bakeries might be OK,” says Teftsis, who also owns Red Smoke Barbeque in Greektown. “My main objective here was to restore a building, and while I wanted to do something Greek, I didn’t want to open a restaurant.”

Recent changes made to the store include replacing the windows in June and, just yesterday, tuck pointing the entire storefront. “The building is (from the) 1880s, so unless you do that, the brick tends to fall apart.”

Teftsis adds that he and his brother have purchased 218 S. Main St. in Royal Oak, which was once the former Huntington Bank. “We don’t have any specific plans yet, but it was a terrible eyesore. Whatever we put there will be a destination.”

The property, on the west side of Main, between Second and Third streets, was home to two drive-thru teller windows that have since been closed, along with a large parking lot that abuts the alley. Jolly Pumpkin had been planning to open a restaurant and brewery on the site, but decided to look elsewhere.

Immediately west of the property, Huntington Real Estate Group is spending around $1 million to renovate a former bank building into a mixed-use development. The three-story, 19,000-square-foot property has been leased to Factory Detroit, an ad agency on the second floor, and the wealth management group of the Royal Bank of Canada, which took over the third floor.

Plans are to rent out the first floor and a lower level for a restaurant or another use, says Don Nahat, president of Huntington Real Estate Group in Royal Oak. “We’re happy to add more office space to the downtown scene, and we’ve had quite a bit of interest in the office space,” he says. “Royal Oak has one of the best downtown districts in the region, and perhaps the easiest to access with nearby I-696 and I-75.”

IN OTHER NEW BUSINESS NEWS, the beer — including everything from imperial stout to Doppelbock — is flowing at Ale Mary’s in Royal Oak, which will host its grand opening on Saturday. More than 200 have RSVP’d for the event on Facebook for the venue that seats just over 50 people.

“We’re going to have a gentleman helping us out by the door,” says Justin Pries, general manager. “We’ll play it by ear and start a line if we need to.”

One thing patrons can expect — this weekend or any other day, Pries says — is a stocked bar that is heavy on the IPAs, or India Pale Ales. He says he learned his lesson after the business’ soft launch late last month, when he started with 40 barrels, holding anywhere from five to 15.5 gallons each, and had to call in emergency orders soon after.

“We’ve had some growing pains with the menu (in terms) of keeping up (with demand),” Pries says. “We didn’t anticipate the volume that we were going to go through. So we did run out of some stuff, but I think we’ve figured out a good formula and we shouldn’t have that issue anymore.”

In addition to the rotating beer menu is a food selection that Executive Chef Geoffrey Woodman put considerable time into designing, Pries says.

So far, the most popular appetizers have been the Brussels sprouts served with toasted pine nuts and orange brown butter, and the “Best Cornbread Ever.” Other popular items include the lobster tacos, the “Drunken Chicken Philly,” and the beer cheeseburger.

“It’s all made from scratch,” Pries says. “We’re even making sausages in house.”