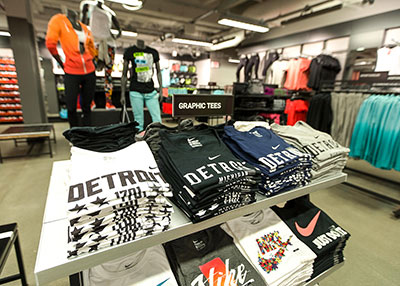 Nike has opened its latest store today in downtown Detroit, located in the historic F.W. Woolworth Co. building next to the Hudson Cafe. In addition to offering sports apparel and shoes, the company plans to support various community programs in Detroit.

He says at least 80 percent of its employees will be from within a five-mile-radius of the two-story store.

Oossanen says the location will attempt to “capture the spirit of the city” by offering local design and product offerings, such as Detroit-specific T-shirts and apparel. In addition, the interior walls of the Detroit store feature photography of local landmarks and sports arenas.

As part of the Nike Community Ambassador Program, the store employees will volunteer their time to be utilized across the city. Before the store opened, the Detroit employees volunteered with the local Boys & Girls Club chapter: the Diehl Club.

Oossanen says the Detroit store is the first Nike store to offer $40,000 in annual grants to eight local non-profit organizations via the Nike Community Impact Fund. The fund spans nationwide, including stores from Portland, Chicago, New Orleans, Washington, D.C., Brooklyn, and Los Angeles. In total, the community stores will award $290,000 in community grants.

“Sport is a cornerstone of our state pride,” says Tom Izzo, head basketball coach at Michigan State University, who was on hand for the opening. “Fostering early, positive experiences with physical activity is incredibly important for young adults, which is why I’m thrilled to welcome Nike to the city of Detroit.”

The new store is located at 1261 Woodward Ave., a block and a half north of Campus Martius Park.