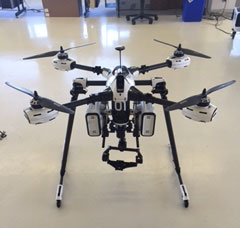 Detroit Aircraft Corp., a designer, manufacturer, and distributor of unmanned aerial vehicles, or drones, will introduce a new universal multi-rotor helicopter on Friday during a presentation at Detroit Startup Week at the Masonic Temple in Midtown.

Called the X-Series, the aerial vehicle platform is equipped with four or eight motors and props, has the ability to carry up to 11 pounds of cargo, and can fly for up to 45 minutes (a new power pack can be quickly reloaded to extend flight times). The aerial vehicle, which will range in price from $18,000 to $30,000, is scheduled to be available later this year.

“The X-Series is an ideal platform for aerial inspections of utility power lines, wind turbines, oil and gas infrastructure, and other commercial applications,” says Jon Rimanelli, founder and CEO of Detroit Aircraft. “We will also discuss how drones can be the next mobile application for Detroit.”

The X-Series can be used for aerial cinematography, utility and power line inspections, and cargo delivery. In addition, the platform can carry multiple payloads, including a gas detection device along with electro-optical and infrared cameras (EO/IR).

Founded in 2011, Detroit Aircraft is based at the former passenger terminal at Detroit City Airport. The Detroit Aircraft presentation of the X-Series will be held at the Masonic Temple at 1 p.m. on Friday