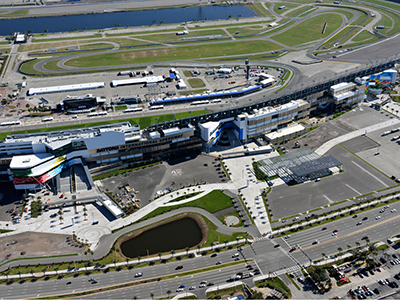 Southfield-based contractor Barton Malow Co. and Detroit-based architectural design firm Rossetti have completed work on Daytona Rising, a $400 million renovation of the Daytona International Speedway in Florida ahead of the 2016 Daytona 500 set for Feb. 21.

“The project was fully focused on the fan experience,” says Len Moser, vice president of sports operations for Barton Malow, the design-builder for the project. Rossetti served as the architect for the renovation.

Moser says the stadium now has a 4,000-foot-long grandstand, with enough space to seat 101,500 spectators. He says while the Daytona International Speedway is an iconic motorsport venue, it lacked certain amenities. Renovations included the addition of 11 “neighborhoods” — football-field-sized social gathering places in the concourses where fans can congregate. No work was done on the track itself.

Moser says the project’s scale and scope were new ground for the Daytona racetrack and for NASCAR in general. He says the grandstand renovations were so extensive that Barton Malow engineers had to account for the curvature of the Earth in their calculations.

He says during the renovations, which began in July 2013, 16 NASCAR races took place and the facility had to be ready to host 100,000 fans for events such as the Daytona 500 and the Rolex 24 during the midst of the construction process.

Detroit-based Chevrolet signed a multi-year partnership with the International Speedway Corp. in July, making the automaker a founding partner of the redevelopment project. Chevrolet has naming rights for one of the entrances, as well.