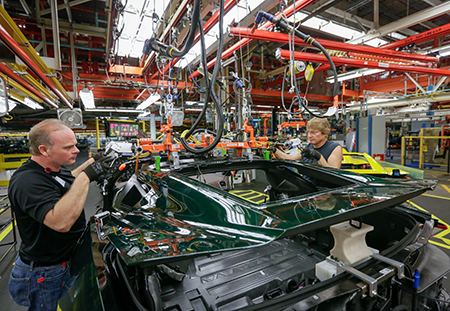 The location of the new center will enable the company to quickly funnel customer feedback to product developers. A “listening lounge” in the center allows product designers and engineers to listen in on customer calls without interfering with the adviser.

At the same time, advisors will identify customer feedback that most benefits GM’s product teams in what is being called a “closed-loop” system.

“We recognize that our front line of customer advisers is directly connected to our bottom line,” says Alicia Boler-Davis, senior vice president of GM’s global customer experience and product quality. “Instead of focusing on closing cases as quickly as possible, we’re focused on listening to our customers and satisfying them as quickly as possible.”

The center will use a new case-management process that reduces the time it takes to satisfy a customer, Boler-Davis says. “It’s another example of how we’re looking at every customer contact as an opportunity to create long-lasting relationships.”

“Two consecutive executive administrations in Washington decided in late 2008 and early 2009 that the consequences of the potential losses and outcomes to the U.S. economy — and harmful effects to numerous employees, retirees, and business owners — were worth avoiding through a federal intervention,” says Sean McAlinden, CAR’s chief economist, who led the analysis. “CAR is confident that in the years ahead this peacetime intervention in the private sector by the U.S. government will be viewed as one of the most successful interventions in U.S. economic history.”