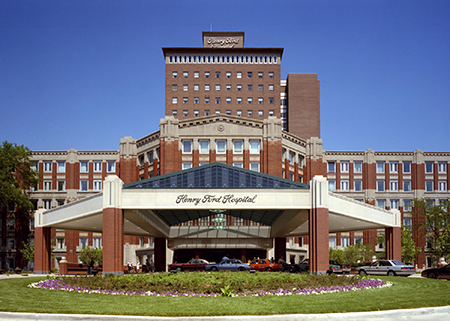 Detroit’s Henry Ford Hospital is the first in Michigan — and one of just 25 centers in the United States — to perform minimally invasive laser brain surgery.

“These types of surgeries can be as effective as conventional brain surgery for select patients and certain tumors, with much less risk and side effects to the patient,” says Dr. Steven Kalkanis, a neurosurgeon and medical director of the Center for Cancer Surgery at Henry Ford Hospital.

In the minimally invasive laser brain surgeries, a neurosurgeon inserts a laser filament into the patient’s brain through a four-millimeter hole in the skull, while monitoring the procedure via MRI scanner images in real time. The laser can deliver extremely precise energy to destroy tumors and abnormal areas of the brain that can cause epilepsy.

Kalkanis says the MRI’s special software makes it possible for a surgeon to measure the temperature in different regions of the brain, allowing a neurosurgeon to make sure the appropriate tissue is being destroyed and minimize damage to healthy tissue.

The MRI-guided laser ablation procedure takes approximately four hours, and Kalkanis says patients are usually discharged the next day from the hospital.

In contrast, conventional brain surgery typically lasts several hours, with partial skull removal and cutting through healthy brain tissue to reach the area needing treatment. After surgery, patients generally stay in the hospital for two to seven days and then are out of work for two to six weeks.

In early November, Norma Probe of Woodhaven was the first person in Michigan to undergo the new treatment. Probe, who has had drug-resistant epilepsy since her 20s, has not had a seizure in the four weeks following her treatment.

“The ability to monitor the temperature of different regions of the brain in the MRI scanner is a significant advancement, allowing us to preserve critical brain regions,” says Dr. Jason Schwalb, surgical director of the comprehensive epilepsy center at Henry Ford Hospital. “We hope that this new procedure will give a comparable cure rate to open surgery with decreased risks and discomfort.”

The minimally invasive surgery was performed a second time in mid-November on a patient experiencing blurred vision, headaches, and dizziness due to a tumor that could not be reached by conventional brain surgery

“In this situation all other treatments had failed and surgery was not possible because of the tumor’s location,” says Kalkanis, who performed the surgery along with Dr. Ian Lee. “We literally had exhausted all options; this new minimally invasive laser surgery gave us the one option we needed to be able to treat this tumor and prolong life.”

Kalkanis says the patient went home the morning after the surgery. “Her headaches have significantly improved, and she is functioning at near-normal levels. This is an excellent outcome for a first procedure,” he says.