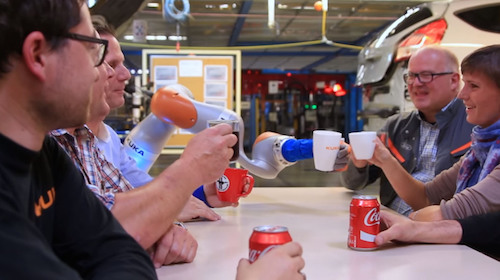 The trial is part of the company’s investigation into Industry 4.0, a term to describe a fourth industrial revolution that better merges automation, data exchange, and manufacturing technologies.

“Robots are helping make tasks easier, safer, and quicker, complementing our employees with abilities that open up … production and design for new Ford models,” says Karl Anton, director of vehicle operations at Ford of Europe.

At nearly three feet high, the new collaborative robots, also known as co-bots, help line workers at two workstations by lifting and automatically positioning shock absorbers into wheel arches and then pushing a button to complete the installation.

Equipped with high-tech sensors, the co-bots stop immediately if they detect an arm in its path to ensure worker safety.

“Working overhead with heavy air-powered tools is a tough job that requires strength, stamina, and accuracy,” says Ngali Bongongo, a production worker at Ford’s Cologne plant. “The robot is a real help.”

Developed over two years, the robot program was carried out in partnership with KUKA Roboter GmbH, a Germany-based robot manufacturer that operates a large facility in Shelby Township. The auto manufacturer is now reviewing further use of collaborative robots that can be programmed to perform tasks ranging from handshakes to making a coffee.

In Related News… The 2016 Ford Focus RS is now arriving at U.S. dealerships, the automaker reported today. With a starting price of $36,605, the vehicle comes equipped with a specially designed 2.3-liter EcoBoost engine that produces 350 horsepower and 350 pound-feet of torque. It has a maximum speed of 165 mph.

The Focus RS also offers four different drive modes — including the first-ever Drift mode — as well as the ability to restart a stalled engine without manual operation.