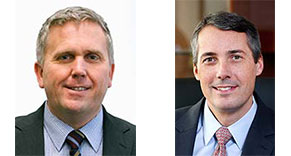 Stuart Rowley, previous vice president and controller of the company, has been named to a new position of vice president of strategy, while John Lawler, vice president, chairman, and CEO of Ford China, has been appointed to Rowley’s former position.

“Stuart and John have played key roles in delivering Ford’s long-term global growth strategy and strong financial performance,” says Mark Fields, president and CEO of Ford. “These moves are part of our commitment to continue developing our leadership team and strengthening their expertise throughout the business.”

Leadership of Ford’s operations in China will be directed by Dave Schoch, group vice president and president of Asia Pacific. He will add the title of chairman and CEO of Ford China.

“As our growth plans in China have developed, this market is delivering an increasingly important portion of our revenue and profits globally,” Fields says. “Elevating the reporting of this business right now reflects China’s importance in our profitable growth plan going forward.”

Marin Burela, president of Changan Ford, has announced his plans to retire in October, and has been named Asia Pacific special adviser.

Meanwhile, Nigel Harris, president and managing director of Ford India, has been elected as a company officer, and he will succeed Burela as president of Changan Ford after his departure.