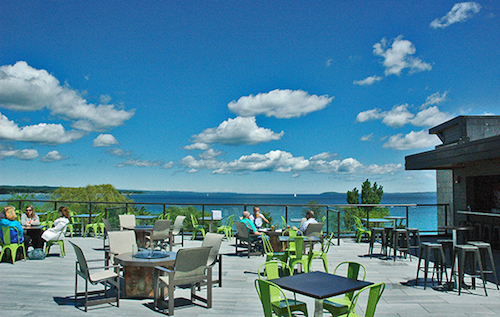 “I’ve been repeating myself, talking about all the trials and tribulations we’ve been through, but honestly it was worth every minute,” says Bridget Hawks, general manager of the hotel. “We’re so excited to finally have our doors open, and to be able to offer this beautiful property to the public.”

Hawks says the décor in the main lobby includes polished floor concrete, walls of salvaged brick from the former Traverse City State Hospital, and logging tools hung from the walls.

She says the hotel’s restaurant and bar, the Warehouse Kitchen + Cork, and rooftop bar, H + L Social, will focus their menus on seasonal items using locally sourced food. A fitness center, a boardroom, and a 5,500-square-foot banquet area, will also be available for use.

“It’s going to be a very fun place for guests and members of the community to meet and mingle,” Hawks says.

IN RELATED TRAVERSE CITY NEWS: Earthen Ales brewery is relocating to the Village at Grand Traverse Commons. The 10-barrel brew house offers six to eight taps on draft, and will seat 100. It is set to open in late summer or early fall.

An Italian restaurant, PepeNero, is moving to the first floor of the Kirkbridge Hall building at 700 Cottageview Dr., with an opening date set in July.

Japanese eatery Gaijin, owned by Simon Joseph, will open in mid-June on east Front Street. The restaurant will offer traditional Japanese ramen and dishes such as dumpling and bao buns.