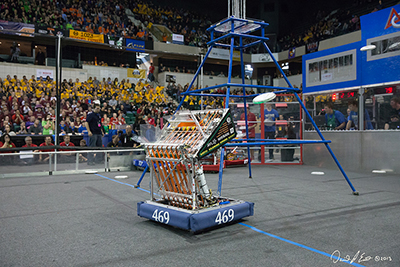 First in Michigan, a robotics competition for high school students, has expanded its tournament schedule with 21 district competitions being held this year compared to 18 competitions in 2015.

“The idea of the competition is to get kids excited about and passionate about STEM careers,” says Gail Alpert, president of First in Michigan. “We do that through a robot, which … provides exposure to electrical, mechanical, programming, IT, really every aspect of STEM. And then aside from that, because each team operates like a little business, you also have marketing people and outreach.”

Alpert says the state of Michigan has more high school robotics teams than any other state, with more than 410 teams. District competitions, which begin Thursday, will be held at high schools and universities across the state, including Midland Dow High School, Kettering University, Ann Arbor Skyline, and Southfield High School.

First in Michigan doubled the size of the state tournament last year when it moved to the DeltaPlex Arena in Grand Rapids, allowing the amount of qualifying teams to expand from 64 to 102.

“Our growth has been exponential, thanks originally to the automotive industry which introduced (robotics competitions) to Michigan in the early ’90s,” Alpert says. “Since then, the state has offered a grant to help seed new teams across the state at any publicly-funded high school, so that could be charters, regular high schools, and public academies, and they will pay for the registration fees, a stipend for the teachers, and some of the advancement fees.”

She says the First Robotics teams are offered mentors from companies such as General Motors Co., Dow Chemical Co., and Ford Motor Co.

“(Robotics competitions are) important not only for students but the industries that support them,” Alpert says. “There are not enough engineers to go around. We know that everything is moving toward a more technologically-centered business environment, and the kids are learning these skills and are way ahead (of other students) when they join a First Robotics team.”

The First in Michigan State Finals are set for April 14-16.