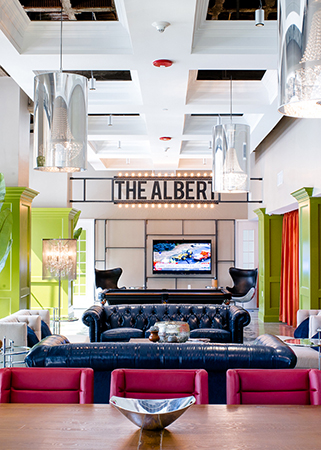 The former Griswold Building, at 1214 Griswold, is nearing a complete renovation that puts 127 renovated units right in the heart of downtown Detroit.

“When you think about what’s going on at Capitol Park (the area behind the Westin Book Cadillac Hotel), it’s going to be a very vibrant setting,” says Richard Broder, CEO of Birmingham-based Broder & Sachse Real Estate Services, which manages the property, now called The Albert. “We’re the first of several openings out here.”

Broder says his company began leasing completed units this spring, with contractors just finishing up the last few apartments. Talks are also under way with retailers to fill the 14,000 square feet of space on the building’s first floor.

Kelly Deines, creative director at Rossetti — which served as the design architect for the common spaces in the project, which converted the building’s HUD Section-8 senior housing to market-rate apartments — describes the interior as “old meets new.”

“Even the namesake of the project is based on the fact that architect Albert Kahn did the building in (1929),” Deines says. “So we basically looked at this as a fusion of 1920s architecture and the look and feel of what seems to be attracting youth to work in the city of Detroit.”

Deines compares the renovation to a sort of excavation or an archeological dig, which revealed hidden black granite and stone materials. “We were able to redeem the ceiling heights from the 1920s era,” he adds.

In keeping with a collaborative, startup-minded theme, the designer opened the first floor by replacing stonewalls with floor-to-ceiling glass, highlighting the view of the Capitol Park Historic District and park. They also worked to position the entrance lobby as a sort of living room.

“People don’t normally hang out it their (apartment) lobby, but we made that space look like you could comfortably sit there and feel like you’re at your favorite restaurant or club,” Deines says. “We were inspired by color palettes from the arts and crafts textile designer William Morris, but kind of electrified them.”

For more information about the building, where residential units designed by Detroit-based Kraemer Design Group start at $1,295 a month, visit thealbertcapitolpark.com.

IN OTHER DESIGN NEWS, Design Industries Foundation Fighting AIDS will help kick off the Detroit Design Festival with its Dining By Design event to be held Thursday to Saturday at the former Federal Reserve Building in Detroit.

The event will culminate with the Dining by Design Gala, which brings together local talent with sponsors to create three-dimensional dining installations for each of the tables.

“Detroit has such an incredible legacy and design community that encompassed pretty much all aspects of design,” says Deines, a co-chair of the event. “Here, we have automotive — which not every city has. You’ve also got exhibition, graphics, art design, interiors, architecture, and product.

“When you get all of these people together and create a environment around something that’s so fundamental like food, you end up having some pretty wonderful things to take a look at that.”

Editor’s note: The original version of this article identified only Rosetti as the design architect for the Albert. It has since been updated to reflect that Rossetti designed the common spaces, and Kraemer Design Group designed the residential units.