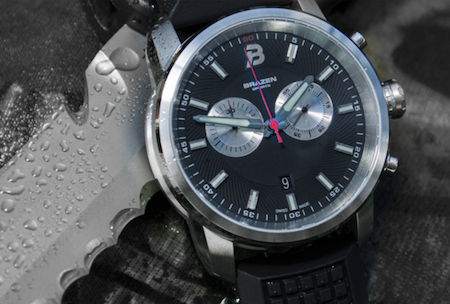 Brazen Sports in Detroit, which produces a line of custom watches geared to outdoor sporting enthusiasts, has completed a trifecta by being the first non-traditional sponsor to represent three of the nation’s top shooting sports organizations.

The company today announced it has signed a multi-year agreement to be the official timepiece-keeper of 3-Gun Nation, a multi-platform media company that showcases an “X-Games of the Shooting Sports.” In recent months, Brazen Sports has signed sponsorship agreements with USA Shooting and the United States Practical Shooting Association, or USPSA.

In addition, Brazen Sports will donate $100 for every first-edition watch sold to 3-Gun Nation to add more programming, prizes, and competitions. “To have a company such as Brazen Sports become a partner with 3-Gun Nation is truly a great day for competitive shooting,” says Pete Brown, president of 3-Gun Nation.

Working with the shooting community, Eddie also has partnered with some of the most noted competitive shooters in the nation, including Max Michel, J.J. Racaza, Shane Coley, and David Radulovich. Each so-called brand ambassador can give away their Brazen Sports game watch they are wearing for any of the events that they are attending or competing in.

“This is an All-American, family-friendly sport, and the pursuit of marksmanship excellence comes at a price,” says Eddie Rimanelli, founder and president of Brazen Sports, who has spent more than 20 years in the fine jewelry industry, including positions with Tiffany & Co. and Cartier. “At the end of the day, these athletes are self-made, just like Brazen Sports.”

Over the last two years, Rimanelli has designed and engineered a patented watch case that draws heavily on the aesthetics of an ammunition chamber by capturing the contours of a cartridge, ejector rim, and spent primer. The company offers a collection of eight watches, including the DUEL Chronograph, Military Tactical Chronograph, Motorsports Chronograph, Center Fire, and Classic Sports.

Blog: Connecting with Your Customers During COVID-19