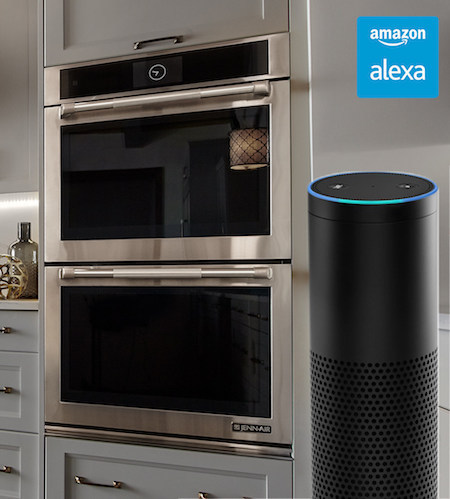 Benton Harbor-based luxury appliance company Jenn-Air yesterday announced users of its latest Connected Wall Ovens can use their voices, as well as the brand’s existing IOS and Android wall oven apps, to control many of the appliance’s functions.

Voice commands have been created for several operations, including pre-heating, setting timers, adjusting temperatures, and changing cooking modes. For example, while prepping and mixing ingredients, preheating the oven to the desired temperature can be initiated by saying, “Alexa, tell Jenn-Air to pre-heat the oven to 400 degrees.”

Jenn-Air Connected Wall Ovens are already largely controllable using IOS and Android mobile applications, including checking doneness from another room or preheating from across town at the grocery store. They also offer compatibility with Nest thermostats and advanced cooking algorithms that can help with food preparation, and help homes maintain a comfortable temperature while two ovens are operating. These and other planned connectivity features can be upgraded over time, ensuring that Jenn-Air’s products are protected from early obsolescence.

The ovens are available in single, double, and microwave/wall oven combination configurations and are priced from $3,599-$5,199. The company says a line of Alexa-activated dishwashers will debut in the fall.

More information about Jenn-Air connected appliances can be found here.