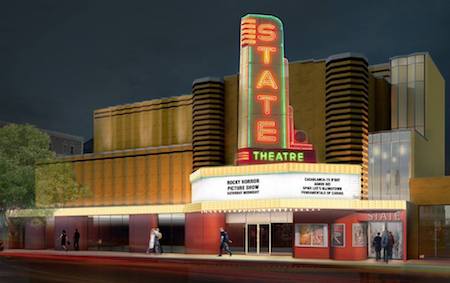 After 10 months and $8.5 million in renovations, the Michigan Theater Foundation will host a grand re-opening for the State Theatre located at the corner of State and Liberty streets in downtown Ann Arbor on Dec. 8. Movies at the new theatre will be open to the public on Dec. 9 at 1 p.m.

Restorations included recreating the venue’s original red carpeting, updating movie projection and sound systems, while preserving the State Theatre’s art deco aesthetic. The overall project allowed the theatre to increase the number of screens from two to four, while adding increased legroom and more comfortable seating. The theater is also now fully accessible, with a large elevator and an escalator, and guests can enjoy a full-service cocktail bar and Michigan-themed concessions.

The State Theatre’s goal is to show “must see arthouse films,” including new releases, festival programming, repertory films, cult classics, and more. Opening weekend features will include “The Disaster Artist,” “The Square,” and “Human Flow.” In turn, there will be a special engagement screening of Detroit-filmed “Destined” from Dec. 8-13 and a 1942 series including “The Fleet’s In,” “Saboteur,” “Yankee Doodle Dandy,” and “Woman of the Year.”

State Theatre film tickets cost $10 for adults, $8 for students, seniors, and children under 12, and $7.50 for Michigan and State Theater members.

Advance tickets go on sale to the public at 10 a.m. Dec. 1 and will be available here.