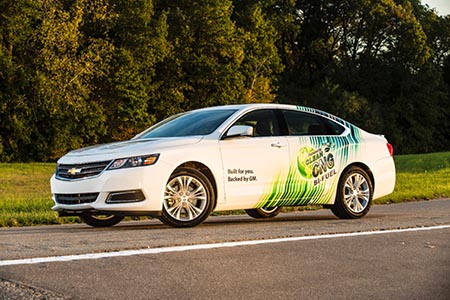 The 2015 bi-fuel Chevrolet Impala — which can run on compressed natural gas just as easily as it runs on gasoline — will go on sale later this year, the automaker announced today. The starting price will be $38,210.

Operating on natural gas can result in an average fuel savings of nearly $1.13 per gasoline-gallon-equivalent based on a national average of $3.24 per gallon of gasoline, according to the Automobile Association of America. Also, compressed natural gas vehicles typically have 20 percent fewer greenhouse gas emissions than gasoline-powered cars.

“If you can buy renewable fuel at $1.95 per gallon while reducing greenhouse gas emissions, everybody wins,” says Mel Kurtz, president of Cleveland-based Quasar Energy Group, which uses organic waste including leftover beer grains to produce biogas, which is then converted into compressed natural gas.

The bi-fuel sedan is factory built and will be the first on the market to offer a factory warranty, with GM’s 3-year/36,000-mile new vehicle limited bumper-to-bumper warranty and 5-year/100,000-mile limited powertrain warranty.

“To avoid feelings of range anxiety common in owners of CNG-only vehicles, we made the Impala bi-fuel, allowing our customers to drive on CNG when available and on gasoline when it’s not,” says Nichole Kraatz, Impala chief engineer, who notes that these types of fueling stations can be scarce outside of California and Oklahoma.

She adds that the vehicle seamlessly switches to gasoline power when the compressed natural gas tank is depleted. Drivers who wish to change fuels while driving can do so by simply pushing a button.