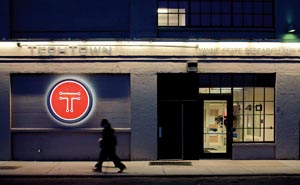 Even though the first semester has yet to end, it’s already been a good year for Randal Charlton.

The executive director of Detroit’s TechTown, whose tweedy affability belies his intensity, is aiming to make the Wayne State University-affiliated business incubator the kind of biotech hub that draws national, if not global, attention.

It’s the type of big, audacious goal that, in Detroit, rallies cautious optimism, and Charlton doesn’t intend to disappoint. A steady stream of good news has come from the New Center urban research and technology park for some 18 months.

In early 2009, in the throes of the global economic meltdown, Charlton announced the creation of a $4.1-million, 15,000-square-foot stem-cell commercialization center designed to bring cutting-edge research to market. And earlier this year, TechTown unveiled plans for “TechTwo,” a second site located at the former Dalgleish Cadillac dealership expected to open by June. The 130,000-square-foot building was bought for $1 million at Charlton’s urging. The project, located a block from TechTown’s original location (called TechOne), more than doubles available research and office space.

But there’s plenty more room for growth, as TechTown is primed to grow throughout a 12-block district bounded by I-94, the Lodge Freeway, Woodward Avenue, and an Amtrak rail line. Located in the New Amsterdam historic district, several complementary projects have already been added, including recently renovated loft-style residences, the existing Next Energy center, and two charter schools geared to math and science. “It really allows us to build a better mousetrap,” Charlton says.

Charlton plans to have the commercialization center at TechOne operational by early October, when the 2010 World Stem Cell Summit brings thousands of stem-cell researchers, venture capitalists, and policymakers to the Detroit Marriott at the Renaissance Center. Already, TechTown’s garnered notice.

A deal with Israeli biotech incubator Thalia Bioventure will send 10 life-sciences companies to the incubator’s Midtown campus this year. Three have already made Detroit their North American home base: Taburit, a biobank for umbilical-cord blood that CEO Amnon Pelz says may hire as many as 50 employees over the next 18 months; Bio Aesthetics Innovation Ltd., which uses stem cells to grow skin grafts and implants; and Bonus Therapeutic Ltd., which develops stem-cell therapies for bone repair.

In February of this year, TechTown announced a similar arrangement with the University of Windsor, which is working to build its own biotech incubator. And Italian IT firm DS Group, which specializes in the pharmaceutical, healthcare, and telecom sectors, also struck a deal to set up shop at TechTown.

Wayne State University President Jay Noren couldn’t agree more. “Randal … is a champion at engaging people who have cutting-edge technology and helping them to understand it has business potential,” he says. “He and TechTown have gotten a lot of international attention because of it.”

TechTown has come a long way from its humble beginnings, says WSU President Emeritus Irvin Reid. The incubator started “on a very thin dime,” he recalls, with a building donated by General Motors. The 1927 structure, designed by renowned industrial architect Albert Kahn, was originally built as a service center for GM’s former Pontiac division. Later, Chevrolet used the building, and the third floor was where the original Corvette was designed in the 1950s.

Since GM donated the building in 1997, TechTown hasn’t strayed far from the initial vision of Reid and a small group of health care, business, and policy leaders, including Henry Ford Health Systems and New Center Council Inc.

At that time, before withering manufacturing bases and an economic downturn made it imperative, the idea of spurring entrepreneurialism had not been explored by most universities with the urgency it has today. “We were visionary,” Reid says. Diminishing state support for universities and the need to forestall annual tuition increases has played a part, as well.

That vision aimed to stop the exodus of talented entrepreneurs from the city by providing them with a place to launch their businesses within the city’s borders, creating as many as 60 new companies. “Today,” Reid says, “TechTown has twice that number of businesses.”

TechTown was one of the only university-affiliated incubators to develop companies across several emerging high-tech industries, including alternative energy, advanced engineering, and biotechnology. Given the incubator’s humble origins, not many observers envisioned such success. In the early days, Reid says, “as we got money through rent, we would build floor by floor.”

These days, TechTown has stronger legs, but the project remains as important as ever in Detroit, still a small big town in the biotech world.

“We’re not like Boston,” says Gloria Heppner, associate vice president for research at Wayne State University. “If you’re a researcher in Boston, you’re just another researcher among many. Here in Detroit, everyone has to count. Recognition breaks down institutional barriers. A place like TechTown works because it has access to cutting-edge research and development. And universities achieve economic development because they have a TechTown. It doesn’t work unless both parts are there and both work together.”

Nevertheless, the competition is stiff — and not only from the usual suspects in California and Massachusetts.

Most post-industrial Midwestern cities muddling through the great recession are leveraging their assets to become new biotech hot spots, Charlton says. And cities such as Minneapolis, Pittsburgh, and even Cincinnati are attracting increasing amounts of venture-capital dollars.

Metro Detroit is so far holding its own. Last year, the Detroit-Ann Arbor corridor moved from fifth to third, with $68.8 million in rankings for Midwest health-care venture investment, according to a recent report from Cleveland-based incubator BioEnterprise.

Michigan moved from fourth to third in the rankings, with $102.2 million, down slightly from the $105 million the state attracted in 2008 for medical-device manufacturers, biopharmaceutical companies, and health-care software and service concerns.

But ahead of metro Detroit are metro regions like that of Minneapolis, which in 2009 drew $199 million over 23 deals, and nearly $320 million the year before; and Cincinnati, which brought in $121.2 million over eight deals last year, a spike from $19.9 million in 2008.

According to the Washington-based National Venture Capital Association, biotechnology venture-capital investments totaled more than $3.5 billion nationwide last year. “Everyone is trying to find their own path to success,” says Stephen Rapundalo, president and CEO of MichBio, the state’s biotechnology industry association. “You have to understand what your strengths and opportunities are, and each has done so in their own ways.”

Charlton, Rapundalo says, has been an incredible catalyst for growing TechTown’s bioscience activity. “But how much of that will be translated into broader visibility?” he asks. “It’s still a little too early to tell.”

TechTown’s biobanking assets are formidable. Asterand PLC, a company that provides human tissue samples to researchers for such pharmaceutical giants as Bristol-Myers Squibb, has been housed at TechTown since 2004, when Charlton was Asterand CEO. The incubator also houses a vast collection of cancer-cell samples from Henry Ford Health System, and more than 3 million blood samples from newborns from the Michigan Department of Community Health and the National Institutes of Health perinatal biobank.

Last July, TechTown became one of only a dozen around the world to be designated a Soft Landing International Incubator, joining others in places such as Boston, Silicon Valley, Baltimore, and Hong Kong. Soft Landing programs are intended to pave entry to home markets for foreign companies. Both Thalia Bioventure and the Windsor deal were put together under its umbrella.

The other great asset TechTown has, Rapundalo says, is Wayne State and the density of health-care systems, including the Henry Ford Health System and the Detroit Medical Center. It’s a great foundation, he says. But challenges remain.

“Companies are always looking for money,” he says. “The industry is not cheap — it’s high-risk, but high-return.”

But the sector also takes time to grow. Biotech sounds sexy but it involves the drudgery of lengthy research, trial and error, and extensive clinical trials — something that’s hard to explain to policymakers and potential investors looking for big developments and job announcements.

“These are companies that will walk in the door with one, two, or six people, not 100 employees,” says TechTown’s Soft Landings director Nancy Cappola. “But over time they will grow; it’s the Asterand model.”