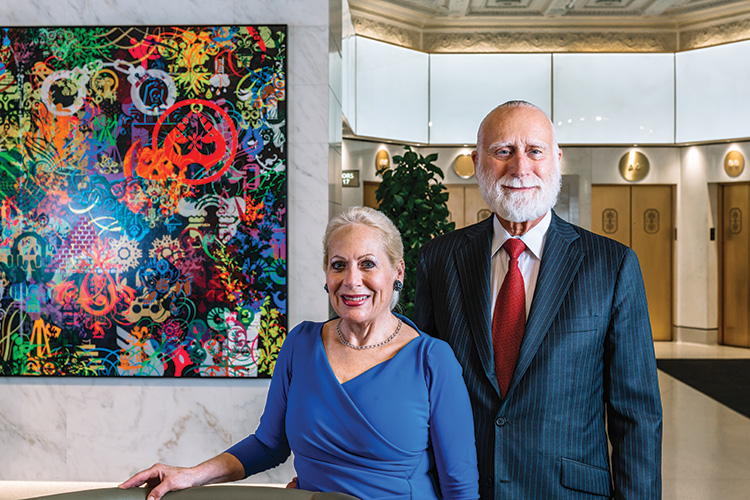 Bassett & Bassett Inc. is, by definition, a communications and consulting firm in Detroit owned by a husband-and-wife team helps clients tell their stories, work through issues, and enhance their brands.

The owners, Tina and Leland Bassett, also have simultaneously raised millions of dollars for two of Detroit’s major cultural institutions.

Not that they don’t have enough going on with their agency. They recently celebrated the firm’s 30th anniversary by adding offices in Pune, India, and Beirut, as well as launching Bassett & Bassett Executive Search and a digital and content marketing platform.

As they built the firm, in the mid-1990s they established parallel roles as primary fundraisers for the Detroit Institute of Arts (Tina) and Music Hall Center for Performing Arts (Leland).

“I’ve been involved with the DIA my whole life,” Tina says. “What happened is that I (became a member of) the board and chairman of the development committee. For years and years I was on the board, and there was a group called the associates that was a fundraising group. (When) they dissipated, someone said to me, ‘Would you like to resurrect the associates?’ And I said, ‘Yes, I would.’ Then, within that, we developed the Society of Associates.”

For Leland, raising funds for Music Hall was a humble effort at first. “We started it with just six couples,” he says. “We were waiting for the economy to get better, but then we said, ‘No, we’re going to start it (now).’ ”

Over time, Leland’s fundraising team developed an annual trip to New York for top-level donors. It now includes more than 40 people and involves Broadway shows, backstage tours, and other experiences the donors can take home to help with their long-term vision for  the Music Hall.

Both institutions are in the midst of capital campaigns. The DIA is working on building its operating endowment to $400 million. The Music Hall is working on a $7 million drive to retire legacy debt the institution incurred as a result of the 2008 global financial crisis.

With the couple leading similar fundraising roles, they often share tactical ideas and sometimes use each other’s strategies — to a point. “It takes two different approaches because you have two different audiences,” Tina says. “The DIA has a tremendous support group and is now a global brand due to the Grand Bargain.”

Leland says the Music Hall serves as a collection of different experiences. “We go from traditional fife and drum to hip hop to Bollywood to the National Arab Orchestra to Jackson Browne,” he says. “We’ve very deliberately provided a wide spectrum of cultural exposure.”

While 30 years of working with some of the region’s most high-profile people, companies, and institutions clearly gives the Bassetts an advantage when it comes to connecting with potential donors, it’s never quite that simple. “It’s like anythingâ€…—â€…to be successful, you have to work at it,” Tina says. “If we don’t all come together, we won’t have a legacy to pass on to the next generation.”