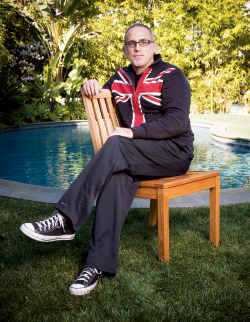 Looking to expand outside Michigan, third-generation developer Gilbert “Buzz” Silverman headed to Florida, but quickly determined the demand for new homes and stores was waning. “So we checked out Arizona, and it was the same thing,” says Silverman, chairman and CEO of Silverman Cos. in Bingham Farms.

“So we went to Los Angeles and, as they say, we struck gold.” After a mutual friend introduced Silverman to Los Angeles developer and fellow Michigan native Xorin Balbes, the pair began looking for land in culturally divergent neighborhoods in and around Hollywood. “It took all of seven seconds on the phone with Buzz to know that we were going to be partners,” says Balbes, founder of Temple Home, which redesigns and restores manor estates, including the renovation of the Frank Lloyd Wright-designed Sowden House in L.A. Balbes grew up in an entrepreneurial family in Oak Park (his parents founded Southfield-based home décor chain House of Blinds).

”I loved Michigan,” he says, “but I wasn’t up for the winters.” In recent months, Silverman and Balbes purchased a former hotel and surrounding property in Silver Lake, just east of Hollywood, near the intersection of Sunset and Santa Monica boulevards. “It’s a strong neighborhood,” Silverman says, “but it lacks opportunities for move-up residents and new commercial offerings.”

To meet that demand, the pair will start construction later this year on a $35-million, 100-luxury apartment project, with up to 12,000 square feet of retail space. Projected to open in spring 2010, the development is being financed by Comerica Bank, which has a strong presence in southern California. Two similar projects are in the works, as well. Closer to home, Silverman is developing a  Lowe’s Home Improvement Center next to Great Lakes Crossing in Auburn Hills while completing a retail and hotel project at I-75 and Sashabaw in Clarkston.