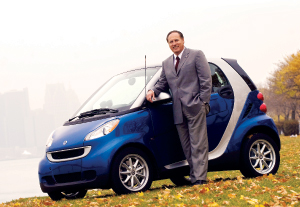 Detroit native Dave Schembri has been given a challenge few folks ever face: launching an entirely new brand of automobiles into the crowded American market. Yet whether it’s a matter of fortuitous timing or Schembri’s own smarts, Daimler AG’s pint-sized Smart ForTwo car seems destined to make a big splash when, after a series of setbacks and delays, it hits the U.S. market in January.

Originally, a joint venture between what was then Daimler-Benz AG and Swiss watchmaker Swatch, Smart was given a tough mandate when first conceived more than a decade ago: develop an all-new line of micro-cars aimed at urban markets where fuel prices are high and parking is scarce.

Measuring a meager 8 feet nose-to-tail, the original smart Fortwo was one of the hits of the 1997 Frankfurt Motor Show. But despite repeated efforts to bring Smart to the States, Daimler-Benz (and later, DaimlerChrysler, and now Daimler AG) couldn’t come up with a sound business plan.

Not until Roger Penske stepped into the equation, anyway.

The motorsports legend has made both his reputation and his fortune by spotting opportunities where others couldn’t. And over the years, Penske had become increasingly confident that by leveraging his vast auto-retailing experience, he could make Smart a success in the United States. To develop a concrete plan, Penske tapped Schembri, a one-time Mercedes executive and Smart aficionado. Together, they’ve crafted an unusual plan in which Penske Automotive Group will be charged with setting up the dealer network. Two-thirds of the dealerships will be in-store concepts with Mercedes Benz. And nine dealers out of 72 will be Penske Automotive Group stores.

“We have our reputation on the line,” Penske says, recognizing his one shot at making the venture succeed. “Without Dave, I never would’ve even attempted this.”

For his part, Schembri, 54, has his hands full. His plan for Smart calls for a slow and carefully orchestrated rollout, something he learned handling various management duties at Volkswagen, Mitsubishi, and American Motors Corp. “Marketing [is] my passion,” Schembri says, “but learning the business from the finance side made me more effective.”

To generate attention for Smart, Schembri and his team recently completed a cross-country tour, giving test-drives to 50,000 potential customers. Online, Smart has generated more than 30,000 “reservations” — potential customers plunking down $99 to hold a place in line. Now the big push begins, as Schembri’s team moves to convert reservations into firm dealer orders. Another major challenge: every Fortwo will be custom-built, normally a no-no in an industry where buyers are expected to settle for whatever they can find on the dealer’s lot.