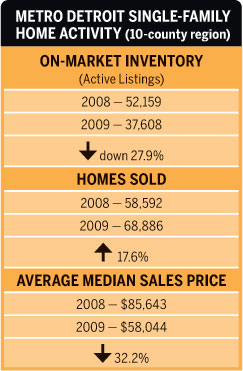 Kelly Sweeney likes to call it the mouse that ate the elephant. Rarely does a company acquire a competitor nearly two-thirds its size. “You can’t always hold back and let the market dictate your actions; sometimes it pays to be proactive,” says Sweeney, CEO of Coldwell Banker Weir Manuel in downtown Birmingham.

Since the acquisition last August — the former Weir Manuel Realtors had 2008 gross sales of $263 million, while then Coldwell Banker Schweitzer Real Estate Inc., in Sterling Heights, posted $722 million in gross sales — Sweeney has adopted the roles of Mr. Inside and Mr. Outside.

Internally, Sweeney has cleared out $1.5 million on the expense side since the sale, while out in the community, the residential real-estate firm has gotten aggressive selling existing and bank-owned homes.

“The roughest period for the housing market is behind us, and the market is beginning to stabilize, but there is a lot of inventory,” Sweeney says. “Federal tax credits are helping us sell homes, but the credits only last through June. It will be a balancing act going forward.”

But Sweeney has a few aces up his sleeve. Coldwell Banker’s ownership team includes foreclosure expert David Trott, president and managing partner of the law firm of Trott & Trott in Farmington Hills. While Trott’s law firm, which has 75 attorneys on staff, handles hundreds of foreclosures, new workout programs have been helping the market.

“We’re spending a lot more time on loan modifications to help people save their homes,” Trott says. “We’re working on behalf of our clients, and we’re deploying a lot more people. It’s a better model, and we’re having a lot of success with it.”

There’s also veteran home-lending professional Tom Balames, who is putting together a mortgage origination firm and a title company to help round out Coldwell Banker’s offerings.

Still, it won’t be a cakewalk. Home sales last year in the 10-county region were up 17.6 percent­ — to 68,886 units over 2008, while on-market inventory (active listings) dropped nearly 28 percent ­— to 37,608 units ­— during the same period, according to Realcomp II Ltd., a multiple listing service in Farm-ington Hills. The sales hike and inventory drop were both encouraging signs.

“Now that the economic shock has worn off, people are realizing that the market has been set,” Sweeney says. “The fear of the unknown in terms of the global financial crisis is gone. But we need to solve unemployment, lower taxes, and lure companies to take advantage of what still is a very well-trained workforce.”