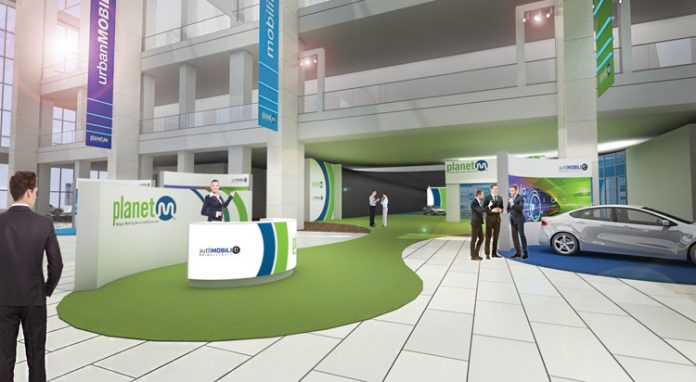 In the 1985 film “Back to the Future,” audiences were genuinely fascinated by the imagery of a flying DeLorean, giant moving holograms, hover boards, and a time machine fueled by household rubbish. The special effects in the sci-fi film not only whetted our appetite for technology, they served as a harbinger of the future.

Put another way, would our smartphones be as advanced today without the communicators from the original “Star Trek” television series in the 1960s? Although we don’t yet have transporters that can “beam” us from one location to another, the communicators did inspire the flip phone, which laid the groundwork for smartphones. 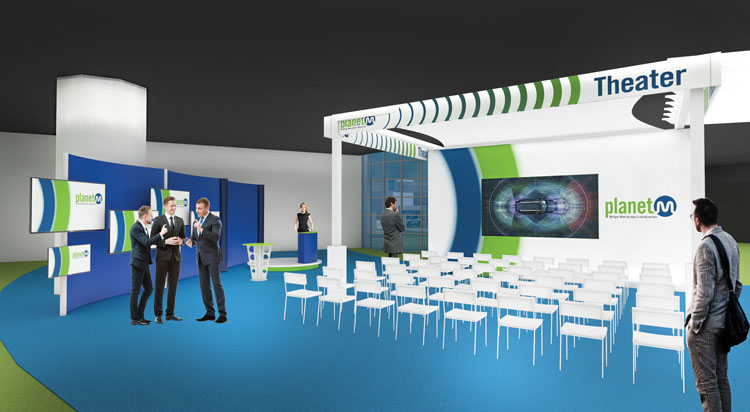 While Hollywood has long served as a test lab for future ideas, it by no means has a monopoly on setting the stage for the next big thing. Tangible proof comes in a major new exhibition centered on NextGen transportation and mobility platforms from the organizers of the 2017 North American International Auto Show at Cobo Center in downtown Detroit. Don’t expect to see flying cars zooming above Jefferson Avenue, at least not this year, but something every bit as remarkable will be taking place in mid-January.

To highlight, retain, and attract as large a portion of the emerging autonomous vehicle market and future mobility platforms in metro Detroit and Michigan as possible, the Detroit Auto Dealers Association in Troy — the only group of automotive dealers in the world that own, manage, and invite exhibitors to an international auto show — will launch Automobili-D throughout the five days prior to the public event, which runs from Jan. 14-22.

To most people, the auto show may appear to be a single event — but this year it will be much different. Up until now, the show hung its hat on the design and engineering of the vehicles themselves, as well as serving as an appealing, multisensual public exhibition of new cars and trucks during a traditionally slow sales period in the middle of winter.

That won’t change, but focusing solely on the “cars as stars” now has its limits. Consider that, over the past three years, technology has changed the auto and transportation sectors like never before — not just in the vehicles themselves, but also when it comes to the bigger picture, involving the way we communicate with each other and the way we will communicate with our transportation in the future.

AutoMobili-D, which runs Jan. 8-12 during the media and industry preview days, represents the largest investment auto show organizers have ever made, even taking into account the profound changes that took place in 1988 that made the auto show a true international event. More recently, increasing numbers of the professional attendees touring the show during industry preview days haven’t had direct ties to the automotive sector.

“Our job here at the show is to continue to evolve, and suddenly that evolution is moving at an exponential pace when it comes to autos and mobility in general.” — Rod Alberts, Executive Director, Detroit Auto Dealers Association, Troy

In fact, in 2017, more than half of the people expected to attend the industry preview days will come from the technology sector — not car designers or marketing people, but pure technology people with a vast array of concepts, inventions, and innovations from the broad spectrum of the transportation industry, including connected cars, trucks, buses, and motorcycles equipped with onboard sensors that communicate with antennas and sensors set in or on traffic signals, light and electric poles, streets, and satellites.

Other companies in Detroit and elsewhere are working on autonomous aerial vehicles that can lift and transport not only vehicles, but large cargo containers that have long been standardized to work seamlessly between the shipping, rail, and trucking sectors. Those aerial cargo containers, which can be outfitted as luxury pods to move people around, are drawing the interest of FedEx and UPS.

Taking it a step further, imagine a car or an SUV loaded with a family of four, along with their luggage, arriving at Oakland/Troy Airport near Maple Road and Coolidge Highway, where an unmanned drone will pick up the entire vehicle and transport it to Cherry Capital Airport in Traverse City. From there, the family can explore northern Michigan for a week or more and, when done, circle back to Cherry Capital Airport for the return trip home. 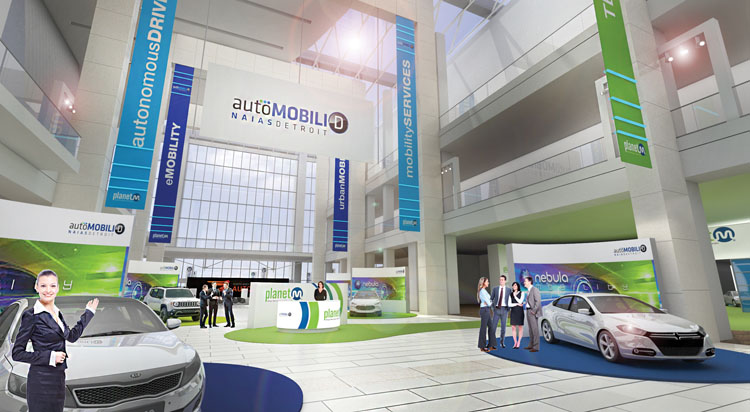 “It may be difficult at first to understand the importance of this change in autonomous transportation,” says Sam Slaughter, 2017 chairman of the auto show and owner of Sellers Auto Group, which operates Sellers Buick GMC in Farmington and Sellers Subaru in Macomb Township. “It’s like someone in the early 1980s saying that the internet will someday become useful in the future.”

To that end, AutoMobili-D will feature 120 “future-driven” exhibitors amid 120,000 square feet of display space in the atrium of Cobo Center, along with its neighboring exhibit hall. In addition to major OEMs, suppliers, and technology firms, the exhibit will feature more than four dozen startup companies working on future transportation platforms that applied to be part of the event with Techstars Mobility, a Detroit-based incubator of future transportation platforms.

“For the past year we’ve been working on this initiative and traveling the world meeting with automakers, suppliers, and partners,” says Rod Alberts, executive director of the Detroit Auto Dealers Association. “With strong support from leading automakers … the world’s largest suppliers and innovators, like ZF, IBM, and Schaeffler, all are eager to participate in AutoMobili-D and showcase their advanced technologies and mobility plans.”

The futuristic transportation exhibition will feature an opening keynote address on Jan. 8 by John Krafcik, CEO of Google Self-Driving Cars. The engine-search giant is working on bringing an autonomous vehicle to market in partnership with Roush Industries Inc. in Livonia, a designer and builder of concept vehicles and high-performance race cars.

In addition, attendees will have the opportunity to experience real time autonomous driving on an indoor test track, amid highly detailed demonstrations of driverless vehicles that feature everything from park retrieval to park assist systems, along with experiencing low-speed crash-avoidance demonstrations.

There will also be a closed course outdoors, which will occupy a portion of Atwater Street between Cobo Center and the Detroit River. Over the five days, passengers can experience what it’s like to be driven autonomously, inspect future car cabins firsthand, peer at what’s under the hood, and literally kick the tires on what may, indeed, be the next flying DeLorean.

Given that imitation is the sincerest form of flattery, since AutoMobili-D was announced in March, other shows have sought to capitalize on the concept. Organizers of the Los Angeles Auto Show, held annually in mid-November, jumped on the bandwagon by recasting their 2016 exhibition as Automobility LA, although it lacked the future mobility focus of what the Detroit show will offer. Meanwhile, the Consumer Electronics Show (CES) in Las Vegas, held every January (Jan. 5-8, 2017), will host the largest exhibit of auto-related gadgets and integrated electronics it has ever displayed. Floor space for auto and transportation exhibits will more than double from prior years.

In Detroit, the 2017 auto show will still be a place for automakers to reveal and display new models and concept vehicles during media days, but the action will switch mid-afternoon on both days to highlight self-driving vehicles, emerging mobility platforms, vehicle-to-vehicle communication systems, advanced driver assist, and autonomous vehicle functionality as part of AutoMobili-D. 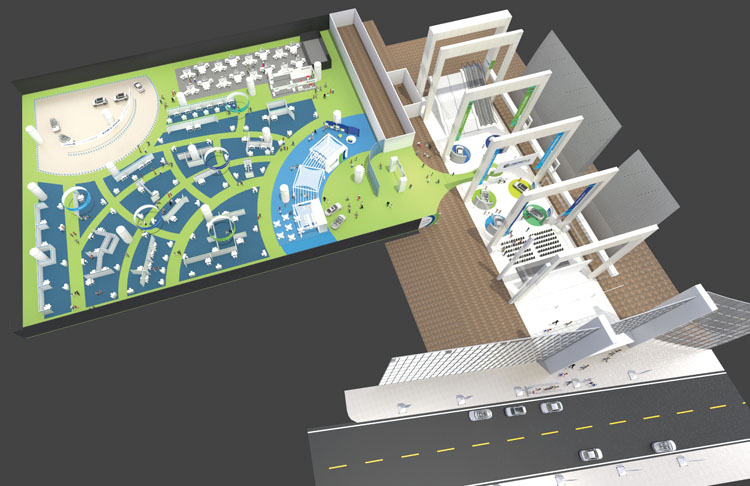 In addition, the latter event will allow traditional OEMs and suppliers to highlight emerging technologies. General Motors Co. will talk about its new car-sharing program, called Maven, which is the latest addition to its OnStar communication platform, while Ford Motor Co., which earlier this year announced it is both an automotive and mobility company, will discuss its foray into electric bicycles, ride-sharing, future autonomous vehicles, and more.

During the following two industry preview days, which are expected to draw more than 45,000 designers, engineers, and executives, up from an all-time record of 40,000 professionals in 2016, AutoMobili-D will expand its offerings of presentations, symposiums, and expert panels.

oted cyber security expert Thomas K. Billington will host a cyber security summit that will center on an array of issues, such as preventing vehicles from being hijacked by their own electronics, and thwarting thefts and eavesdropping that target vehicle occupants. Panel discussions will include a venture capital symposium on funding future transportation and mobility technologies.

Moving forward, organizers say AutoMobili-D will be the DNA of future shows. “As a car guy, I can’t wait for the time in the not-too-distant future when my car drops me off at the entrance to a restaurant and then takes off to park itself,” Slaughter says. “The public won’t need to understand the technology to make use of it and appreciate it.

“At the same time, a big part of Automobili-D will be the fostering of communication between startups and venture capital, to help make these companies an integral part of our future.  What I love about the partnership and ownership of the auto show by the car dealers is that we have the ability and the freedom to see the future and make the investments needed to charge ahead to make it happen.”

Adding to the show’s ambience this year is the recent completion of nearly $300 million in improvements at Cobo Center, which included an expansion into the former Cobo Arena. While the renovation and added space will set the stage for the auto show for the next 25 years, new reveals in the future will be augmented with entirely new ways to experience transportation, ride-sharing, vehicle-sharing, communication platforms and, perhaps, even a hover board for two.

The Gallery – Jan. 7
A ticketed event at MGM Grand Detroit featuring a strolling dinner presented by Chef Wolfgang Puck and ultra-luxury vehicles in the main ballroom.

Charity Preview – Jan. 13
The largest single fundraiser in the world attracts more than 15,000 people for a black-tie party on the auto show floor.