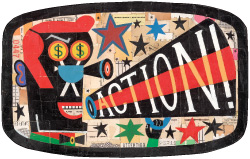 Some 50 films will be shot in Michigan this year, but more work needs to be done if the movie industry is to become a major contributor to the state economy. Consider, of the 32 films shot here last year (beginning in April when sizable tax incentives took effect), only one, Clint Eastwood’s Gran Torino, reached blockbuster status.

All the rest were either TV productions, went straight to DVD, or are still in various stages of production. Even so, those 32 films generated around $70 million in economic activity, according to a recent study by The Center for Economic Analysis at Michigan State University. The film activity also generated around 1,100 year-round equivalent jobs that accounted for $53.8 million in total wage and salary income.

“The film tax credits passed by Michigan have been an unequivocal success,” says Jack Binder, president and producer of Michigan Films Production Inc. in Beverly Hills. Binder is currently lining up a slate of seven films to be filmed here that he says will have a combined production value of $100 million. But the producer of such films as Reign Over Me, starring Adam Sandler and Liv Tyler, says more works needs to be done if Michigan is to become a movie powerhouse.

“There are several studios that are being developed,” Binder says, “which will allow moviemaking to be a year-round industry in Michigan.” Last year, the Michigan native worked with his brother, Mike Binder, a successful director, actor, and screenwriter; author and journalist Mitch Albom; and actor Jeff Daniels to lobby state lawmakers to boost incentives. The result was tax credits of up to 42 percent for films made in the state — the largest in the nation.

While several colleges have already set up film and production classes, it will take time before students enter the industry in great numbers. “We’re taking unemployed auto workers and training them for the film industry,” says Jeff Spilman, managing partner of S3 Entertainment Group in Ferndale, which provides production services, financing, and training. “We also make sure that the film companies know that they can maximize their tax incentives if they hire Michigan workers.”

Meanwhile, tourism has been a hit-and-miss proposition. Because of confidentiality agreements, the Michigan Film Office doesn’t typically tout a film’s production details, but they’re clearly coming up short as it relates to promoting tourism, one of the original selling points to lawmakers.

For example, the state missed out on capitalizing on actor George Clooney, who was in town for two weeks in February filming scenes at Detroit Metropolitan Airport for a movie called Up in the Air. Trouble was, security was so tight, only a handful of people outside of the production crew even caught a glimpse of Clooney.

If the state is going to provide tax credits to filmmakers, they should write into the contracts that the actors must make public appearances to boost tourism activity. Otherwise, as was the case with Clooney, actors fly in and out and nobody sees them.