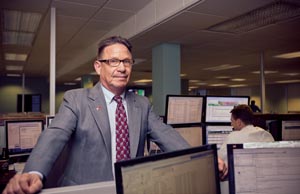 In business or in battle, David T. Maccagnone isn’t afraid to advance. The CEO of Multi-Bank Securities Inc. in Pleasant Ridge, which invests funds on behalf of banks, credit unions, and other institutions, says the success of his firm — it was cited in Inc. magazine’s 2010 list of the 5,000 fastest-growing companies — is due, in large part, to his military experiences.

As a Marine during the Vietnam War, Maccagnone volunteered for one of the most dangerous assignments in the conflict. “I was loading mortar shells into cannons, but it was really boring,” he recalls. “I was 18 years old, and wanted to get into the action.”

He got his wish. On the same day he was promoted to a forward observer and participated in a 30-minute training class, he was involved in a firefight. His first assignment: Direct a mortar strike to take out an enemy position. Trouble was, the first shells exploded 200 yards to his rear, he says. After making some adjustments, the next strike was a direct hit. “Little did I know at the time that the average lifespan of a forward observer was seven minutes,” says Maccagnone, who was shot six different times. “I managed to last 23 months.”

He also proved resourceful. During the Battle of Khe Sanh in 1968, Maccagnone would “borrow” sections of a temporary runway that was built for C-130 supply planes. “We were at the top of a hill and the enemy had us surrounded,” he says. “Just as the Vietnamese did with the French in the 1950s, they would dig tunnels into the hill to get up to our position. We dug foxholes and put the (metal) runway sections at the bottom.”

Maccagnone’s familiarity with near-death experiences began even before he was born. When his mother was six months pregnant and suffering from appendicitis, a medical team had to cut her open. After Maccagnone spilled out onto the operating table, a doctor pushed him back into the womb.

He also survived a bout with pneumonia before he was a year old. (At that time, a priest read him his last rites). At the age of 3, he was run over by a car. “I was blind for a spell, but recovered,” he says. “Once you experience all of those things, you learn not to think about the challenge ahead. You just do it.”

After being honorably discharged from the military and earning a degree in education at Oakland University in Rochester Hills, Maccagnone landed a position as a stockbroker with Merrill Lynch. “It was all cold calls, 12 hours a day,” he says.

He started Multi-Bank Securities in 1988; the company generated $40.5 million in revenue in 2009. The 90-employee firm loans and invests millions of dollars from a sophisticated trading desk. To spur new accounts, a group of sales executives travel the country calling on school districts, municipalities, and financial institutions.

“Our minimum trade is $100,000, and we can go up to several million dollars,” Maccagnone says. “One of the secrets to our success is that we only hire Ph.D.s — [people who are] Poor, Hungry, and Determined.”