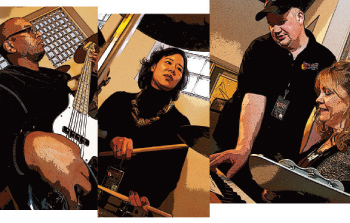 Where can a lawyer, a nightclub manager, an IT director, and the co-owner of a dental office go to lose their inhibitions and rock out with reckless abandon?

Jason Gittinger, executive producer and owner of the Detroit School of Rock and Pop Music, has created a place where “random people, with random backgrounds, at various ages” can create their own rock ’n’ roll experience. “I don’t profess to know anything except how to play the drums,” says Gittinger, 30, who has a degree in jazz studies from Wayne State University. “It makes you feel like you can wake up and make anything happen.”

He says the impetus for starting the school came from promoting bands through his company, Tangerine Moon Productions, in Clawson. “It made me believe we could do this for everybody,” he says. “When you make it about everyone else, you win.”

Gittinger, who still finds time to play drums for local cover band the Mega 80’s, says that while the 2003 comedy film School of Rock might resonate with his students, it wasn’t his motivation for choosing the name of the business. “I was inspired by Motown,” he says. “The movie was just a catalyst.”

Gittinger’s school, located south of downtown Royal Oak, houses rehearsal and performance space for bands and solo musicians who want to perform professionally or are content just to play in their garages. The school also offers a summer day camp and hosts a girls-only group called Girlz Rock. Prices range from $149 a month for a solo artist to $1,299 to attend the three-week camp. And while he doesn’t object to teaching the basics, Gittinger encourages his students to “stop practicing [and] start performing.”

Anna Shih, an attorney for Eaton Corp. in Southfield, saw a flier advertising the school and joined the mailing list. Shih, who has taken drum lessons for nearly two years, was excited to finally hook up with a full band. “The drums aren’t exactly a solo instrument,” Shih says. “Having Jason coach us and learning to play with a group of people is just really valuable,” she says. “And there’s no pressure because we’re all learning.”

Down the road, Gittinger plans to open a 400-seat venue, complete with a studio, rehearsal space, a music store, and restaurants “for all those late-night jam sessions.”